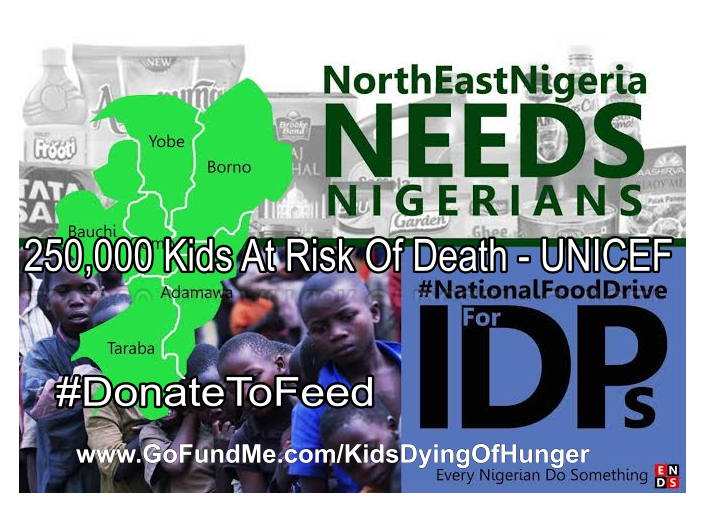 Shocking photographs have revealed the plight of the children starving in Nigeria after they and their families were made homeless by Boko Haram.

The tiny babies and toddlers are so thin that their bones can be seen clearly against their skin, as medical charity Doctors Without Borders (MSF) warned that the country is facing ‘a catastrophic humanitarian emergency’.

Despite pledges from Nigeria to do more to tackle the food shortages among the internally displaced people (IDPs), the United Nations has said that some 50,000 children could starve to death this year in the northeastern state of Borno alone.

At least 188 people died in the camp in Bama between May 23 and June 22, mainly from diarrhoea and malnutrition, while more than 1,200 graves, many of them for children, have been dug near the camp in the last year, MSF said last week.

A Nigerian government delegation, that visited Bama to see conditions for the 25,000 people living there, described it as ‘an overwhelming situation for any government to handle’.

‘We will go back and make reports and soon there will be some relief, more relief coming this way.’

Domestic and international aid agencies rely on the military to drive to 45 miles from the state capital Maiduguri to Bama, which was liberated in March.

Roads in to and out of Maiduguri are nominally open but vehicles are still vulnerable to attack from the Islamist militants, who have been pushed into the bush by the military since January 2015.

Many displaced people from in and around Bama are currently staying in camps and host communities in Maiduguri.

But he said some 1,800 of the most vulnerable had been evacuated to Maiduguri for special treatment and feeding.

The United Nations said in a statement on Thursday that its agencies and partners in northeast Nigeria were ‘reporting high levels of severe malnutrition and desperate conditions’ in recently liberated areas.

‘The conditions we are seeing there are devastating,’ he added, demanding ‘a much faster and wider response’.

More people in urgent need of assistance are being discovered as hard-to-reach remote locations are opened up and UNICEF Nigeria representative Jean Gough had a stark warning if nothing was done.

‘We estimate that there will be almost a quarter of a million children under five suffering from severe acute malnutrition in Borno this year,’ she said in a statement.
‘Unless we reach these children with treatment, one in five of them will die. We cannot allow that to happen.’

The seven-year Boko Haram insurgency has killed at least 20,000 people and displaced more than 2.6million, with a new influx heaping pressure on local authorities.

The violence has left communities destroyed and farmland devastated, also hitting the supply of food to markets, driving up costs for people already robbed of their livelihoods.

SEE THE PICTURES BELOW: 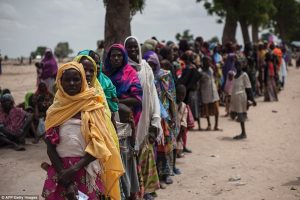 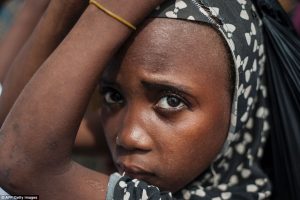 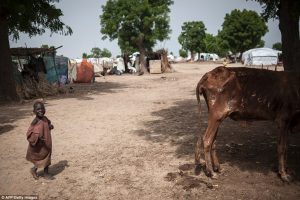 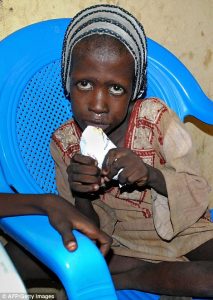 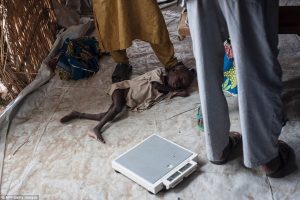 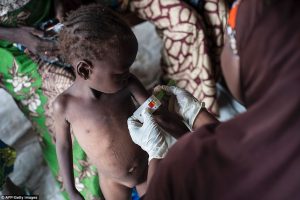 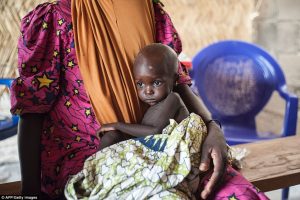 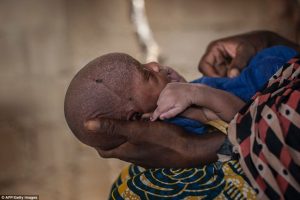 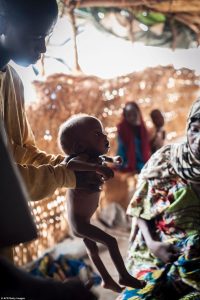 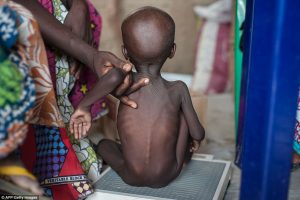 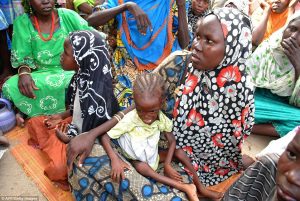