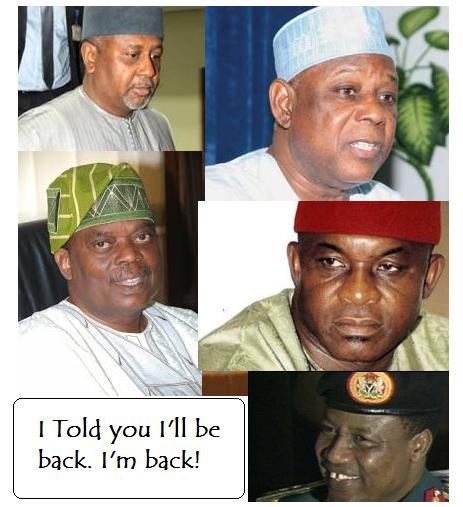 I close and open my eyes and ask again; are they gone yet? Is the Dark Age over yet? It’s been thirty years of hardship. Thirty long years of looting. Thirty unbelievable years, through which our next minute was guaranteed to be twice as hard, bad, pitiful and depressingly embarrassing as our last.

And don’t think I can’t count. I can! PDP took over with guns in the coup of August 1985. They were first called the Babangida-Abacha junta. Then they took off their military uniforms and after eliminating all threats like Brigadier Tunde Idiagbon, installed their “party,” better known today as a “den of killers,” quoting (allegedly) Laureate, Wole Soyinka.

For the thirty long years, they looted 70% of Nigeria’s oil earnings. They installed mechanisms including owning all the oil blocks, to $ billions waylaying brief-case holder middle men in Switzerland where the oil is sold, to the NNPC (National Notorious Petty-thief Corporation) and then via the CBN governor who opens vaults to load mint foreign currency in flight-cases for laundering, to loot Nigeria’s entire earnings. They protected these mechanisms which they transferred from Babangida to Abacha to General Abdusalami, Babangida’s foster brother (whose dad adopted orphaned Babangida), to their fellow General Obasanjo, to his favorite son, Jonathan, padded with their men, the Dasukis, Gusaus and Marks.

Billions of dollars looted yearly, totaling $600 billion by recent counts, by these shameless scums of the earth.

Indeed one cannot and must never denigrate a group or tribe, because tribalism is from Satan, and there will always be outliers in all groups that seem homogeneous, however anyone who voted for that PDP party (that destroyed Nigeria for thirty years and supervised the founding of MEND and Boko and Ombatse and what have you, and sponsored genocidal, blood curdling terror pogroms to cover and use for the looting of billions of dollars annually) is either naïve to a fault, and worth remanding, spiteful to the point of self extermination or simply devilish. There was no excuse, none whatsoever for putting your thumb down for Babangida’s party. I strongly urge whoever did so, north, south, east and west to apologize to his neighbor and seek repentance from God.

So now after PDP ran this country for 30 straight years, Nigeria is broke. We are in the mud. This lootocracy, this kakistocracy has mismanaged the economy so much and looted it dry, now they borrow money and put our children in debt to pay the sinators their hellish salaries. 16 years we have seen that witch, Ngozi at the helm of the economy. For what? For this? That Godwin of the CBN… that’s another thing; these vultures, these vampires always put bank managers at the helm of the Central bank – for one single function: to unfairly support the banks against/and rob the broke masses blind. That Diezani…the thief who steals millions of dollars monthly from market women and mothers across the nation in the kerosene subsidy illegal fraud. Who with her Jide and Kola rascals has looted us dry from the point of sale in Switzerland…where Nigeria is the only nation that sells its oil, through middle-men.

Jonathan was just a clueless ant in the larger, 30-year run PDP scam. What I just don’t understand is what they are waiting for. For May 29th? To loot more money till the last minute?

Are they gone yet?