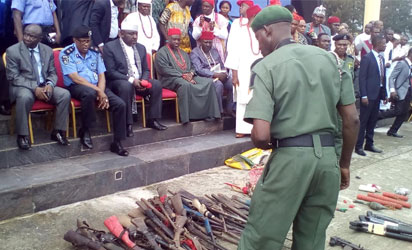 Forty-Eight hours to the expiration of the deadline given to the remnants of the Niger-Delta Avengers fighting in the oil producing areas of Ohaji/Egbema and Oguta, a leading Commander of the militants, General Felix Omereji, Wednesday, surrendered with his fighters and embraced peace.

The event which took place at the Imo International Convention Centre, IICC, also saw the security chiefs in the state in attendance with General Felix stating that they boycotted the first phase of the disarmament programme last week to see what the state government would do with the commanders and their fighters who had surrendered their weapons at the event.

He explained that he and his group were encouraged to surrender their weapons and embrace peace when they saw the sincerity of  the governor with regard to the first disarmament programme.

General Felix and his fighters  surrendered guns, including AK-47 and explosives,regretting all they did in the oil producing areas of the state and prayed that God would also forgive them.