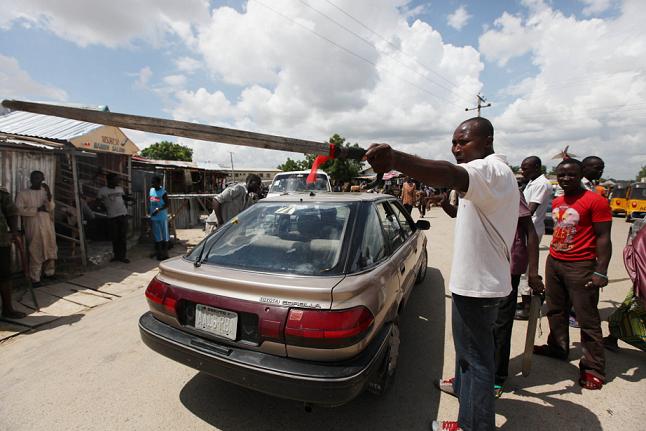 A Nigerian NGO has written to President Goodluck Jonathan requesting permission to recruit, train and arm thousands of civilian volunteers to fight the Boko Haram militant group, according to the group’s leader.

“We have allowed the crisis to become more complicated. We have been too slow; we have been sleeping,” Peregrino Brimah, a popular social activist and public intellectual, told Anadolu Agency.

In the letter, dated April 26, the Every Nigerian Do Something (ENDS) told the president that nearly 25,000 Nigerians – including retired soldiers and policemen – had volunteered to take the battle against Boko Haram to the insurgents’ hideouts provided they are allowed to carry arms.

“We hereby request that you give approval and direct the corresponding arms of government to act necessarily,” it added.

Boasting of massive support from Nigerians and friends of Nigeria, ENDS said it was not asking the government to fund the initiative.

“We…are capable and ready to arm this civilian force and sponsor all logistics of the operation,” it added.

Brimah said they are seeking the president’s approval to carry arms so that government troops would not kill their volunteers and advertise them as Boko Haram fighters.

The request to carry arms follows criticism of the government’s handling of the abduction of scores of schoolgirls in Borno by suspected Boko Haram militants.

Two weeks after, neither the government nor the military has given answers to the mystery surrounding the abduction or the fate of the schoolgirls.

More than 1500 people have been killed this year alone in attacks blamed on Boko Haram insurgents.

Boko Haram first emerged in the early 2000s, preaching against government misrule and corruption. The group later became violent, however, after the death of its leader while in police custody.

In the years since, it has been blamed for attacking places of worship and government institutions, along with causing thousands of deaths.

More than 1500 people have been killed this year alone in attacks blamed on Boko Haram insurgents.

The Nigerian NGO assured the president that their plan of engagement will be in league with the Nigerian military.

“The civilian force will be documented biometrically and all weapons and equipment will be registered for use during the duration of the force majeure,” the letter read in part.

ENDS said it was already working in collaboration with the Civilian Joint Task Force (JTF), which has been helping the government fight Boko Haram in the restive Borno State.

“ENDS has been in regular communication with the Civilian JTF whom we have supported with equipment and advice,” it added.

“We have understood and appreciated their ability and determination to seek out and crush Boko Haram once and for all,” it said.

The civilian JTF came into being only mid last year by Adamu Buba as a one-man army against the insurgents who were mounting daily attacks in Maiduguri, capital of Borno.

Many had expected the insurgents to kill him within days but his survival had spurred many youths to join the purely civilian outfit, now estimated to have around 20,000 members.

Although they are only armed with daggers, swords, knives, machetes and sticks, they have been credited for chasing out the insurgents from Maiduguri to the forest.

The edge civilian JTF members had was their ability to easily spot and identify Boko Haram members in the midst of a crowd, made possible because at least four in five insurgents reportedly grew up in Borno.

President Jonathan himself once praised the civilian JTF, which is now recognized by the local Borno government.

ENDS said the acknowledged contributions of the civilian JTF means that the “role and potential of good civilians in this conflict cannot be undermined and can no longer be underexploited.”

“Young men and women in Borno state, under the civilian JTF, have shown the way. The rest of Nigeria’s good men and women are now prepared to follow,” it added.

Brimah cited the recent abduction of scores of schoolgirls from Borno, by alleged Boko Haram militants, to stress the need for arming vigilantes.

“When the Boko Haram guys kidnapped the girls, the civilian JTF guys were following the track, from village to village,” he told AA.

“They did so for more than 100 kilometers and of course there was no soldier,” he added.

Brimah said locals had advised the vigilantes not to pursue the abductors into the Sambisa forest, a known hideout for Boko Haram.

“These civilians are holding just stick and knives so they hard to turn back,” he explained.

“So these civilians are ready. What they want is weapon. What civilian JTF needs is weapons,” said Brimah.

“They are very well coordinated and are ready to go into Sambisa, quite unlike the army….The army is trying, but they need more support,” he added.

“Nigeria cannot afford to wait any more. The boys are ready to go in and many more youth are volunteering from the country to serve their country,” Brimah said, adding that their letter has been delivered to the presidency.

Presidential spokesman Reuben Abati has not responded to AA request to confirm the receipt of such a letter.

It is doubtful that the president would grant the request to carry arms since the law restricts arm bearing by civilians.

Last year, the parliament turned down requests by two northern states to arm vigilante groups set up to tackle rising insecurity in their domains.

“If they refuse we will have to consider our options,” he told AA. “This mission is essential.”