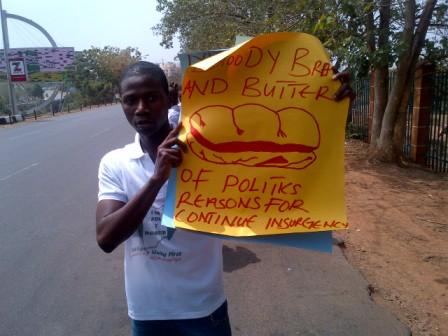 About 50 youth gathered at the Unity Fountain Park in the central area of Abuja on Thursday morning to express their outrage over the recent killing of students by ‘Boko Haram’ in the north-east.
The youth were carrying placards and singing solidarity songs in what was as yet a peaceful demonstration when the police descended on them.
The police confronted the youths, while beating some of the protesters, they used tear gas and riot dispersal techniques to chase them out of Unity Fountain, adjacent the Transcorp Hilton Hotel.
Godswill Okoronkwo one of the protesters told Daily Trust that the protesters came together through social media sites like facebook, twitter and Black Berry Chat.
He said they were all outraged with the gruesome killing of innocent school children in Yobe state and decided to come together and demonstrate.
Mr. Okoronkwo who is a young IT professional appeared confused that the Police will stop the peaceful protest.
He explained that, “all we wanted to do is show the relevant authorities that we are fed up with the senseless killings in the northeastern part of the country.”
Another protester Ike Amadi said the idea behind the protest is to show concern and solidarity with the families of the victims of the killings and kidnappings in the terrorism prone areas of the north east.
Another protester in defiance to the presence of police men stationed around the Unity Fountain displayed a placard with the message, “Bloody bread and butter of politics reason for continued insurgency.”
DailyTrust