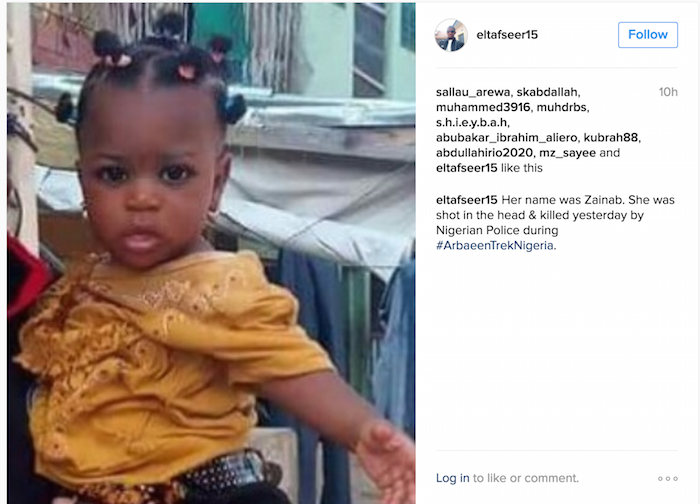 Kaduna-based activist John Danfulani embedded himself with Shia Muslims embarking on this year’s Arbaeen trek from Kano to Zaria and witnessed firsthand the attack on the minority Muslim group by Nigerian authorities.

It was important to have one of us, a third party, witness and give account of the happenings due to typically conflicting reports from both sides.

Danfulani reported in tweets and video that the Shia Muslims trekking on the side of the road, not obstructing traffic and with no form of weapons, came under unprovoked assault by the Nigerian security forces in dozens of vehicles.

Over 50 were killed according to records from the mortuary. The Islamic movement claims the numbers are as many as 100 with the police carting away many of the dead bodies. During a similar attack on protesting members of the Islamic movement last December, hundreds were similarly killed and the Kaduna state government later confessed to secretly burying as many as 350 in a mass grave at Mando cemetery. This late-date government confession during a State judicial inquiry panel, validated the Islamic movement’s claims over those initially presented by Nigerian security agencies who claimed and still do, that only 7 Shia Muslims were killed in that incident.

The fact that those killed in the currently ongoing attacks were observing the Arbaeen trek reinforces a scary picture of a deliberate effort by the Nigerian authorities to ban Shia thought in Nigeria. Protesting Shia have not been shot at in such manner, nor have other groups when they block roads during Friday and Sunday observances. The unprovoked attack on the Arbaeen trek appears to be a deliberate attack on Shia-related rituals not directly tied to the Islamic movement. Those killed the past days bore no identification of the movement and only went out as Shia Muslims and companions trekking to commiserate with martyred Imam Hussein.

The Arbaeen trek is a global mostly Shia Muslim ritual activity akin to the breast cancer walks and other social activities which bring about compassion, tolerance and forbearing.

Nigeria’s constitution guarantees the rights to freedom of assembly and freedom of religious thought (Sections 10 and Sections 38).

Deliberate Repression And The Double Standard

While Islamic movement leader Sheikh Zakzaky and his wife Zeenat have been locked up without trial for almost a year since the Zaria massacre and the movement has been banned by several northern governors, the recommendations of the Kaduna Judicial inquiry to bring implicated members of the Nigerian army has been willfully ignored by the Buhari government.

These actions and inactions by the Nigerian government promote a culture and apparent official policy position where the police, military and indeed ordinary civilians believe Shia Muslims are ripe for the killing.