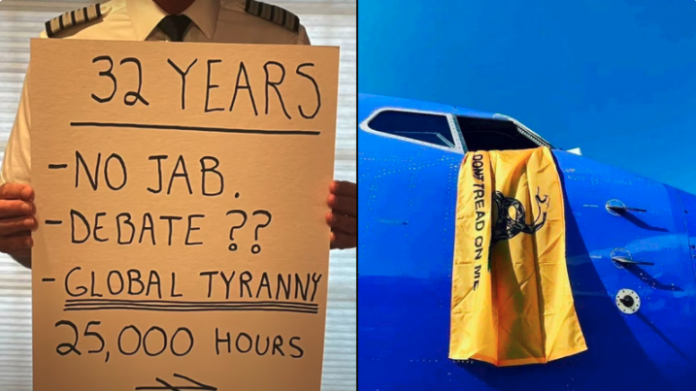 The Biden administration’s vaccine mandates have awakened the sleeping giant that is America’s airline pilots.

The men and women who keep the airline industry afloat by transporting travelers from one place to another have launched a rebellion against forcible injections the media doesn’t want you to know about.

Appearing on Tucker Carlson Tonight, the co-founder of US Freedom Flyers Josh Yoder explained pilots are empowered to refuse the jab, and warned layoffs by Southwest Airlines or other airline companies could destroy the US economy.

A commercial airline pilot talks to Tucker Carlson about about why he is against vaccine mandates pic.twitter.com/UbMnVgboQh

“First of all, we have all the control, and the control comes from a simple word, and that is ‘no’,” Yoder said. “We just don’t need to comply.”

Southwest has denied employees are resisting vaccine mandates, instead claiming thousands of flight cancellations were the result of inclement weather, air traffic control issues and absenteeism, however the reality on the ground (or in the air) is much more simplistic.

The real reason for the cancellations is free-thinking pilots and airline staff have formed a collective resistance drawing a line in the sand and rejecting coercive vaccine orders.

This photo was just sent to me of a grounded Southwest plane flying a Gadsden flag out of the cockpit. The Hero Pilots at Southwest and other Airlines deserve our support. True patriots worthy of the American Freedom Fighter tradition.
Don’t Tread On Me.
God Bless Them 🇺🇸✈️🙏🏻 pic.twitter.com/tAo9pT4Q60