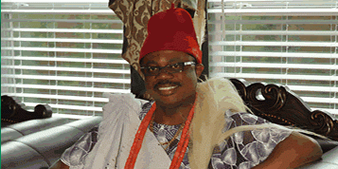 Anambra state governor, Chief Willie Obiano appears to have been overshadowed by powers beyond him as the treasury of the state is said to have been turned into a milking cow.

His wife is also said to have appointed about 100 aides, all at the expense of the Anambra State Government. “This is quite unlike the former governor, Peter Obi who insisted that his wife should not hire aides at the state government’s expense”, bemoaned a source in the Anambra civil service who pleaded anonymity, Elombah said.

Laughable of all the appointment is the appointment by the governor of a senior special assistant on Agric and went further to appoint another as special adviser on fish matters. The Special assistant on Agric we gathered was earlier suspended over fraudulent acts, but was immediately recalled since he is from the same community with Obaino. The Anambra South and Central Senatorial district has been relegated to the background with people from there not getting any relevant position in his government.

Politicians who helped him to victory lamented to elombah.com that they have been left to nurse their wounds for supporting him, as he has abandoned them and brought in ‘technocrats’ who are his previous jobless friends living in the UK and US to run the government. Some of the previous supporters who spoke to us regretted supporting him and had vowed to decamp to the opposition parties if he does not change his stance.

“After all most of the politicians who helped him win the election are Nigerian based technocrats and educated men with proven background, so why will he abandon us”? Bemoaned one of our sources. It is his attitude towards the politicians in the state that made Hon. Uche Ekwunife and others to decamp from the All Progressive Grand Alliance (APGA) stated our source.

As previously reported by elombah.com, the list of the lawmakers from the House of Representatives that defected from APGA to the PDP included the former state governorship aspirant on the platform of APGA and Chairman, House of Representatives Committee on Environment, Hon. Uche Ekwunife; Deputy Chairman, House Committee on Capital Market, Chris Emeka Azubogu and three other lawmakers from the state.

They have also written the National Chairman of the PDP, Alhaji Ahmed Mu’azu, seeking waiver to return to the party and apparently contest the parliamentary election in February 2015.

Other members of the House who have written to the national chairman of the party were the Deputy Chairman of the House Committee on Media and Public Affairs, Victor Afam Ogene; member representing Onitsha North/Onitsha South Federal Constituency, Cyril Egwuatu and the Chairman, House Committee on Culture, Tourism, Pilgrimages and Religious Matters, Chief John Olibie. Their defection to the PDP has reduced APGA’s grip on the House.

Sources within the government who spoke to elombah.com also revealed that Obiano collects N100 million weekly as “security votes”, but this fund has been siphoned to private pockets in the name of fighting security. Obiano also pays his fellow looter, Chief Victor Ume, the ambattled APGA chairman, 40 million Naira monthly in his capacity as APGA Chairman, and the sole APGA executive officer and sole administrator at the national, state and local government level.

A reliable source noted that the security fight is only in Awka, Nnewi and Onitsha, while allowing the rest town to be ravaged by criminal elements. The contracts awarded by him in his 300 days in office we gathered are given to his friends and cronies while abandoning the ones appointed by ex governor, Peter Obi.

“Most of the contractors are related to him. Some are his friends, while others are recommended by his friends” stated a source.

Further information made available to us from sources noted that his recent sponsoring of the State lawmakers to the USA was to pacify them by allegedly buying choice houses for them in the States while also shopping one for himself.

Calls and text messages placed to his Special Adviser Media, James Eze to respond to these allegations were not picked, neither were they returned. However, just below going to press, a Senior Aide to Governor Obiano sent this text message from phone number +234-8033090972 as the governor’s official response: “I saw your famous report. We don’t join issues with such incredulous stories”.