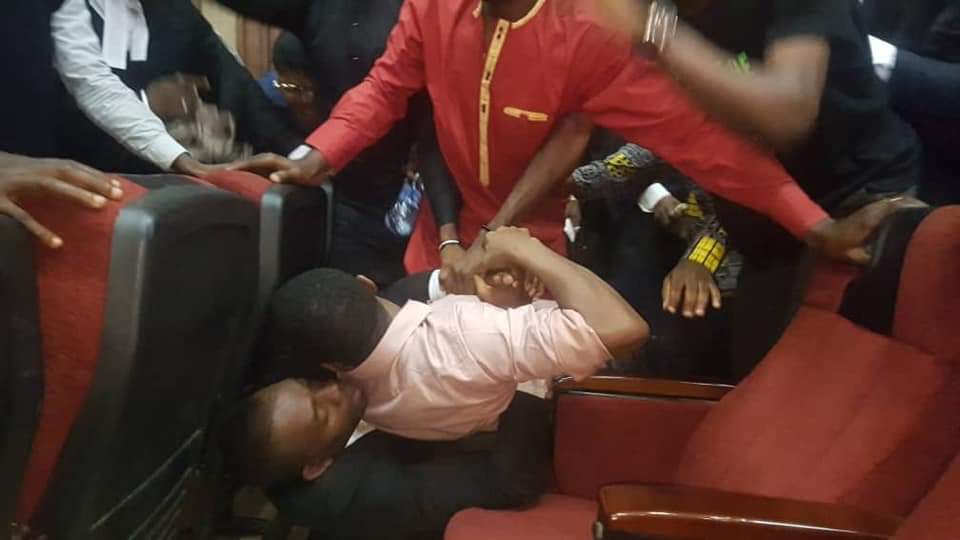 Officials of the State Security Service (SSS) have rearrested an activist, Omoyele Sowore.

The situation caused pandemonium at the court with videos emerging of SSS officials, inside a court room, physically assaulting Mr Sowore in a bid to arrest him.

Mr Sowore was only released Thursday night on the orders of Justice Ijeoma Ojukwu.

Mrs Ojukwu criticised the SSS for refusing to obey her earlier order to release the activist after meeting his bail conditions.

She ordered the SSS to release the Sahara Reporters publisher within 24 hours and also pay him N100,000 for improper legal conduct.

After the commotion during the arrest, the SSS officials allowed Mr Sowore to be driven to their office by his lawyer, Femi Falana, under the armed escort of SSS vehicles and officials.

No reason has been given for the rearrest.

Watch video of the arrest:

…SSS threatened to kill me in detention — Sowore

The publisher of Sahara Reporters, Omoyele Sowore, on Friday accused the State Security Service of trying to kill him after his release on Thursday night.

Mr Sowore and his co-accused, Olawale Bakare, were released after Justice Ijeoma Ojukwu of the Federal High Court in Abuja gave an order that they should be release within 24 hours.

They had pleaded not guilty to the charge and were granted bail on October 4, in the sum of N100m and N50m respectively with two sureties in like sum.

But on Friday, a day after they were released, armed SSS operatives stormed the Federal High Court where the duo had gone to enforce their fundamental rights.

Several SSS agents forced themselves into the court, physically assaulted Mr Sowore and re-arrested him and Mr Bakare in front of Justice Ojukwu.

Mr Sowore, in an interview with journalists in the courtroom, said the SSS had told him that he will not walk out of its custody alive.

“It might be my only word on the record before they kill me; this is an attempt to assassinate me in court. They came with guns and they tried to shoot and they dragged me down in front of a judge after I have been granted bail,” he said.

“I said it that these are a bunch of lawless people and they were reluctant to respect the order of the court. Now they have shown it to the whole world.

“They tried to break me in prison, sent delegations to me, offering all kinds of things and I refused and they promised that I will not walk out of their detention alive and that is what they have come to implement today.”

The SSS could not be immediately reached for comments.

Mr Sowore urged Nigerians not to be afraid and said people have to make the sacrifice for the country to work.

“What is important for Nigerians to know is that I am not going to give up until every Nigerian benefits from a country that is theirs and I have made it very clear,” he said.

“Nobody in Nigeria should be afraid, it is our country and some people have to make the sacrifice for this country to be a country of rule, law and of dignity; and this also involves even judges. If suspects who have been given bail are not safe in court, the judges themselves are not safe.”

Mr Sowore explained that the sudden exit of the judge was is due to the manner the SSS operatives had caused a scene inside the courtroom.

“That is why the judge had to retire hurriedly into her chambers,” he said.

“We urge you to hang around so that you can witness this historic day in Nigeria.”

Mr Sowore was arrested on August 3 for planning #RevolutionNow, a series of protests to demand an end to corruption and demand better living conditions for all citizens.