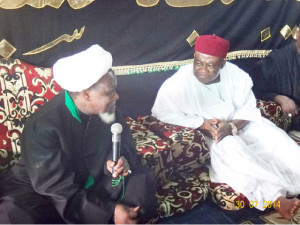 The leader of Sam4Nigeria and presidential aspirant under the All Progressives Congress (APC), Mr. Sam Nda-Isaiah, yesterday paid a condolence to the leader of Islamic Movement in Nigeria, Sheikh Ibraheem Zakzaky over the killing of 33 members of the movement, including three of his sons. Nda-Isaiah, who was at the Gyellesu residence of Sheikh Ibraheem Zakzaky in Zaria, said Nigerians must come together to save the country from poor leadership and impunity which are threatening to bring it to its knees. Nda-Isaiah said, “We now heard that 33 people have been killed. Even if you kill 33 chickens illegally, that could have been quite serious. So, I believe that the only thing that can solve our problem now in this country in leadership. We currently don’t have it. It is time that we start to run ourselves properly. “I think they (Shiite) should go to court and fight till the end. It is commendable that their leader has called for restraint. I don’t know how many of us would lose three children and still maintain our calm. That is very commendable. All those that are guilty must face the law fully. It is time that we start to punish all crimes in this country.” “The government must see this as a challenge; therefore, it’s dangerous to keep mute seeing things happening like this,” he added. Nda-Isaiah specifically commended the exemplary leadership attribute displayed by Sheikh Zakzaky in the face of the tragedy. “We commend your leadership attribute and the dignity you exemplified. We wonder how many leaders could contain this (loss) and remain calm even when they lost three of their children this way. We are very proud of this attribute. If leaders were like you, the world would be a better place to live,” he said. He pointed out that Nigerians should never keep quiet in the face of this atrocity, saying that it is dangerous to remain silent in this situation. FG Silent Over The Killings – El-Zakzaky Receiving his guest, Sheikh Zakzaky expressed surprise by the silence of the Nigerian government over the killing of his three sons and followers. According to him, the government’s silence has confirmed the sect’s position that there was conspiracy in the killing. He said it was unfortunate that some soldiers would decide to kill innocent people that were carrying out a peaceful procession. “We have confirmed that one Lt Colonel Okuh personally killed some of the victims, including my sons. I am surprised that 33 people were killed and nobody from the government is saying anything. “My sons and some of the victims were tortured to death. They were taken alive to their Basawa Barracks and tortured to death because there were signs of electric shocks on some of the corpses, according to doctors. “It would surprise you to know that there was even a roadside beggar among those that were killed. There was even one Mr. Anyanwu, about 68-year-old, who was also killed because he simply cautioned them on how they were killing innocent people. Because of that they shot him to death. So, it is not about Shiites-soldiers clash but the killing armless and defenceless people by soldiers,” said Zakzaky. Nda-Isaiah recently visited the general overseer of the Living Faith World-wide, Bishop David Oyedepo at Cananland in Lagos where they discussed behind closed doors for close to one hour.
LShip