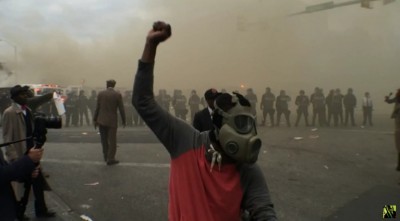 A recent case of police violence against black people added the fury caused by alarmingly rising trend of racism in the USA. A young black man, Freddie Gray, who was taken into custody on April 12, lost his life one week later as a result of torture he had allegedly been subjected to while in custody. Gray’s death prompted wide protests, which in turn lead to the use of excessive force by police officers. This escalated into riots attended by thousands of people, resulting in the injury of 100 police officers, 150 torched cars and 200 destroyed business.

Although the governor of Maryland declared a state of emergency, anti-racist riots raged on and spread to other states like New York and Washington DC. Especially, in Ferguson, the heart of the protests, people put up barricades on roads and stopped traffic.

In a similar fashion, a black teenager called Michael Brown was killed by a police officer last year in August and protests and riots swiftly spread like wildfire in the country and avalanched into wide-scaled riots in an unprecedented manner.

Seeing these repeated incidents of state violence against black people, and the clear protection of the perpetrators by the state, many have begun to question US democracy. As many consider these developments racist terrorism, leading media groups continue to harshly criticise the US government. The Washington Post analysed the problem on May 3, 2015 in their report “From Ferguson to Baltimore: The consequences of government-sponsored segregation” and ended with an important note: “Like Ferguson before it, Baltimore will not be the last such conflagration the nation needlessly experiences.”

In Baltimore, although the black people make up 64% of the population, they are treated in an unfair and unequal manner which also reflects in the gap between living standards, income and even lifespans of black and white Americans.

According to a report by the American Civil Liberties Union (ACLU), 109 people lost their lives from 2010-14 in the state of Maryland due to police violence; 69% of those people were black. Despite this fact, only in 2 of these 109 cases were the charged police officers were put to trial.

The number of unemployed people in the black community is twice as high as the white community. Furthermore, unemployment across the country is 4.7% for white people and 10.1% for black people. Also, the possibility of black infant death before one year of age is nine times higher than that of the white people.

Now, racist violence and murders have been added to all these negative factors and inequality. Black Americans’ reaction to this inequality is answered with disproportional police force. There are talks of deploying five thousand troops in Baltimore; such actions only cause the riots to escalate into civil conflicts that spread across the country. As the Washington Post put it, no one knows when the next ‘conflagration’ will rise or what kind of a crisis it will bring about.

President Obama, after calling these developments a ‘crisis’, admitted that this has been boiling under the surface for a long time now: “It comes up it seems like once a week now, or once every couple of weeks. This has been a slow-rolling crisis, this has been going on for a long time. This is not new, and we shouldn’t pretend that it’s new”.

All these developments prove that the tradition of using violence and oppression to end problems no matter where they are should be stopped. It is imperative that the US government, especially after witnessing the consequences of its mistaken actions, revisits its policies and replace them with more humane ones before the situation gets worse as President Obama correctly warned.

The latest Baltimore incidents prove once again that policies of violence never bring any solutions; they didn’t work in the USA, nor in the Middle East, Asia, Africa or in the rest of the Islamic world. The erroneous state of mind that tries to stop radical terrorism by drowning it in blood is the same as the one that uses racist violence and police-state oppression to stop social problems with oppression. There is no difference between that state of mind, which causes a policeman to shoot an unarmed black person in the back by considering him a potential criminal with that twisted frame of mind annihilating Muslims with bombs, drones and warplanes, regardless of them being innocent civilians or not.

Both are using violence, which is doomed to fail as violence inevitably ushers in more violence because it fuels feelings of vengeance, anger and hatred. Violence leads not to happiness, peace, welfare and love, but only to societies of fear, oppression and pain.

No problem can be truly solved unless those who govern follow truly loving, compassionate, humane and peaceful approaches to problems and unless they adopt polices of true democracy, equality, freedom and justice. All other methods that contradict human nature are ultimately doomed to fail.