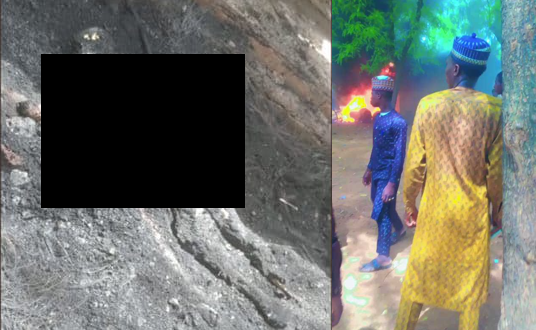 Once again Nigeria is making headlines for the wrong reasons– sinful barbarism.

Wahabeast sect students of Shagari college of education in Sokoto state have again taken the advantage of their greater numbers in that area as reason to take judgment into their hands and perpetrate heinous murder on a female Christian student for alleged blasphemy.

Even if Wahabism prescribes murder for blasphemy, which is not true, any such sentence must only come from established courts after a trial and not by impulsive the hands sick, bloodthirsty youth.

The chat that caused their heinous acts:

Deborah was said to have challenged her colleagues for posting religious things on the department’s WhatsApp group chat.Here is the full transcript of what she said that angered her fellow students.
“Holy Ghost fire nothing will happen to us, this group is not created for sending this rubbish it was meant for sending assignment, test and past Question, who the hell is the prophet?”

While she was wrong for such speech she should never be killed for it.

We do hope the authorities will catch all implicated and grant them the same capital punishment they meted on the untried female for allegedly questioning in a group chat.

“Reason why she was killed. She challenged the people posting religious information in a school group chat.”

Reason why she was killed. She challenged the people posting religious information in a school group chat. pic.twitter.com/BPoTEqGd1x

What if Wahabeasts in Wahhabi minority cities, states and countries are similarly killed without trial? Would this make these barbaric boys happy?

A female student of Shehu Shagari College of Education. COE Sokoto was been beaten and burnt to death for blasphemy. #Sokoto #COE #Justice pic.twitter.com/tPQhAjPWr1

They confirm the act pic.twitter.com/gft7kjEAIg

The culprits on camera

They confirm the act pic.twitter.com/gft7kjEAIg

The college has since been closed but no reports of arrests made: