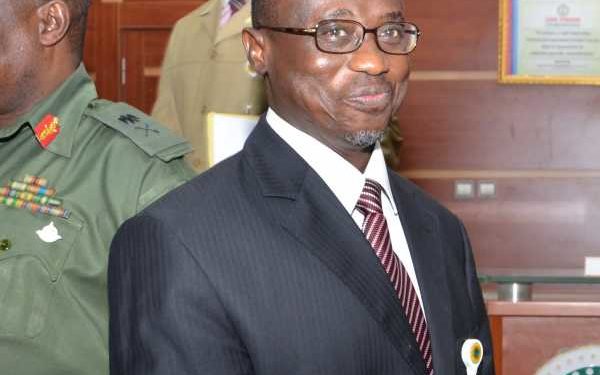 Maikanta Baru, the former group managing director of the NNPC has died.

Mr Baru died late Friday night in yet undisclosed location and of undisclosed ailments. He was 60.

His death was announced early Saturday morning by the current head of the state-owned energy conglomerate, Mele Kyari.

“My brother, my friend and my mentor, Dr Maikanti Kachalla Baru, immediate past GMD of NNPC died late last night,” Mr Kyari wrote on Twitter. “He was of exemplary character and disposition. May Allah forgive him and have mercy upon him.”

Mr Baru was born in 1959 and led a career in engineering, rising through the ranks at the NNPC before he was eventually appointed to lead the organisation by President Muhammadu Buhari in 2016.

It was not immediately clear what caused his death or for how long he had been ill. Whether he passed on in Nigeria or overseas has also yet to be clarified as of press time.
The NNPC in a official statement by its spokesperson, Kennie Obateru, expressed regrets over the sudden death of its former head, describing him as “a consummate Mechanical Engineer, (who) died after a brief illness.”

Mr Baru was an oil marketer and the 18th Group Managing Director of the Nigeria’s state oil firm, Nigerian National Petroleum Corporation (NNPC) from July 2016 to July 2019, when he retired after attaining the statutory retirement age of 60 on July 8, 2019.

Before joining the NNPC, Mr Baru worked at the Jos Steel Rolling Company Limited between 1988 and 1991, where he occupied various positions, including the Head, Corporate Planning and Electrical Department.

He was a recipient of many awards and honours, including the Best Technical Drawing and Mechanical Engineering Students (Parts 1 & 2), 1980 and 1981; Shell BP Petroleum and Lever Brothers prizes for the best final year Mechanical Engineering Student of Ahmadu Bello University Zaria (1982); Presidential Merit award of the Nigerian Society of Chemical Engineers; 2016 Honorary award of the Nigerian Association of Petroleum Explorationists to commemorate his conferment as Honorary Member of NAPE; 2016 Achievement Award of the Society of Petroleum Engineers (SPE) Nigeria Council for Outstanding Contributions to SPE Nigeria; 2017 Award of Excellence of the Petroleum and Natural Gas Senior Staff Association of Nigeria (PENGASSAN) in recognition of his resourcefulness and responsiveness to labour and industrial relations issues in Nigeria oil and gas industry; Local ContentChampion by the Petroleum Technology Association of Nigerian (PETAN)- 2016; PETAN Appricaition Award for the promotion of the growth of Nigerian companies and entrepreneurs in the petroleum industry through sponsorship of Nigeria’s participation at the 2017 Offshore Technology Conference in Houston; 2017 PETAN Oil and Gas Industry Award in recognition of the NNPC aggressive exploration campaign in the Benue Trough and the Chad Basin; Diamond Award in recognition of NNPC’s support and contribution towards the success of SPE’s Nigeria Annual international conference and Exhibition (NAICE) 2017.

Choose Your Death! From Corona Or Our ...