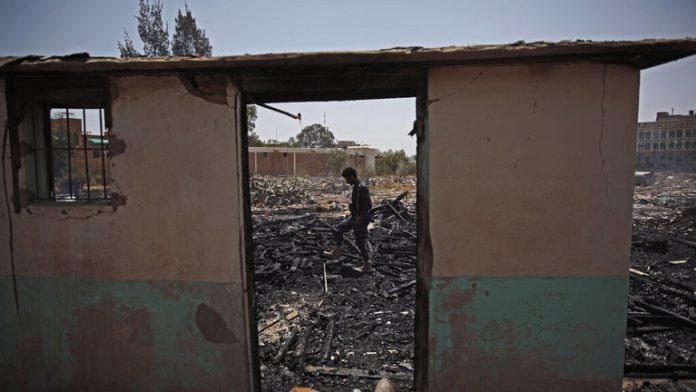 The US has been accused of impeding UN efforts to broker a truce between Yemen’s Ansarallah and the Saudi-led coalition.

Two weeks into his presidency, US President Joe Biden stated that he would seek a negotiated peace in Yemen, effectively rejecting Saudi Arabia. He’s just completed a 180-degree pivot. With such arbitrary foreign policy positions, the US creates instability and weakens its own position.

On December 13, US Senator Bernie Sanders voted to withdraw a War Powers Resolution that would have ended US support for Saudi offensive efforts in Yemen. Sanders was supposed to put the resolution to a vote, confident that it would pass. However, due to mounting pressure from the White House, he decided to back down. Instead, the progressive American senator claimed that he was told by the Biden administration that they would “continue working” with his office to resolve the conflict.

According to The Intercept, which obtained the White House’s key talking points against the resolution, the Biden administration communicated its position that such a resolution would be counterproductive and would exacerbate the crisis in Yemen. According to the ‘Quincy Institute for Responsible Statecraft,’ Sanders’ withdrawal of the resolution “may embolden the many members of Washington’s foreign policy elite who would like to ensure that the president’s capability to unilaterally wage war remains unchallenged by Congress’s constitutional prerogative over matters of war and peace.”

The biggest issue for the US government here is that the War Powers Resolution essentially seeks to compel Biden to implement the majority of the policies he outlined in February of 2021. Despite Biden’s announcement that the US would suspend all “relevant arms sales” to the Saudi-led coalition, which has been at war with Yemen’s Ansarallah, also known as the Houthis, since 2015, this policy position has never been implemented.

During his 2020 campaign, Biden stated that he would declare Saudi Arabia a global “pariah.” However, when it became clear that the powerful oil-producing state was a necessary partner in the Middle East, a realization that came months into the West’s sanctions campaign against Russia, the Biden administration quickly changed its position. In July, the president decided to pay a foreign visit to Saudi Arabia, while in the days preceding he began discussions about resuming supply of offensive weapons to the Saudis; the framing of this was a little deceptive, because the weapons sales freeze of February 2021 had effectively ended by April of the same year anyway. Both of these moves were clearly intended to persuade Saudi Arabia to increase oil production levels, a goal that was thwarted when Saudi Crown Prince Mohammed Bin Salman refused to pander to the US president.

Since then, the US government has approved a potential multibillion-dollar deal with Saudi Arabia and the UAE, and in August, the Biden administration granted immunity to Saudi Crown Prince Mohammed bin Salman for his role in the murder of journalist Jamal Khashoggi. Biden was reportedly humiliated earlier this year after bringing up the Khashoggi killing to the Crown Prince, who responded by citing the Israeli killing of Palestinian-American journalist Shireen Abu Akleh and questioning why Jamal Khashoggi was more important. Notably, when delivering a speech alongside Palestinian Authority President Mahmoud Abbas just days earlier, the US president failed several times to correctly pronounce Shireen Abu Akleh’s name and did not bring the killing up to Israeli representatives.

In its opposition to Senator Bernie Sanders’ Yemen resolution, the White House implied that it had a hand in the six-month ceasefire between the warring parties. In reality, the United Nations brokered the ceasefire, which expired on October 2. The US government, according to Ansarallah, is the primary impediment to peace in Yemen; Abd al-Wahhab al-Mahbashi, a senior member of Ansarallah, recently warned that “the presence of US troops in the Bab al-Mandab and off the coast of Yemen poses a serious threat to maritime navigation.” In fact, Ansarallah sees the conflict as a war on behalf of the United States, with Saudi Arabia acting as its proxy, a view shared by millions of people in the region.

The Saudi-led coalition seized two fuel shipments carrying tons of diesel the day after Sanders withdrew his War Powers Resolution, preventing them from reaching Yemen. One of the major factors contributing to the resurgence of tensions is Yemen’s blockade – Ansarallah accuses Riyadh and Abu Dhabi of stealing the country’s oil resources and depriving native Yemenis. Furthermore, when the US is clearly attempting to cozy up to Saudi Arabia, it signals to Ansarallah’s leadership that the Biden administration favors Riyadh in the conflict.

So far, the Biden administration has been unable to bring the Saudis under its wing in the manner that it had hoped, indicating that its foreign policy tactics have been ineffective at best. The reason for this failure is most likely due to how the current government has dealt with not only Saudi Arabia, but all of the Arabian Peninsula states, in addition to Iran. The United States has demonstrated that it cannot be trusted to keep its word, as evidenced by its botched Iran nuclear deal. More importantly, Saudi Arabia recognizes that when it comes to security, Washington is no longer the most important player. Rather than joining the Biden administration’s dangerous anti-Iran coalition, the Saudis would be wiser to engage diplomatically with Tehran, a step that would be especially beneficial to regional security.

Meanwhile, an escalation in Yemen at this point would be advantageous for Washington, as it would push Saudi Arabia closer to it, as the latter requires US assistance to maintain its war effort, though large-scale ballistic and cruise missile strikes against Saudi Arabia’s vital infrastructure could force the Kingdom to go straight to the negotiating table. Whatever happens, it is clear that US influence in the Arabian Peninsula is rapidly dwindling, and one of its legacies will be this brutal war, which has claimed over 400,000 lives and that the Biden administration has refused to end.

The author’s statements, views, and opinions in this column are solely his or her own and do not necessarily reflect those of NewsRescue.