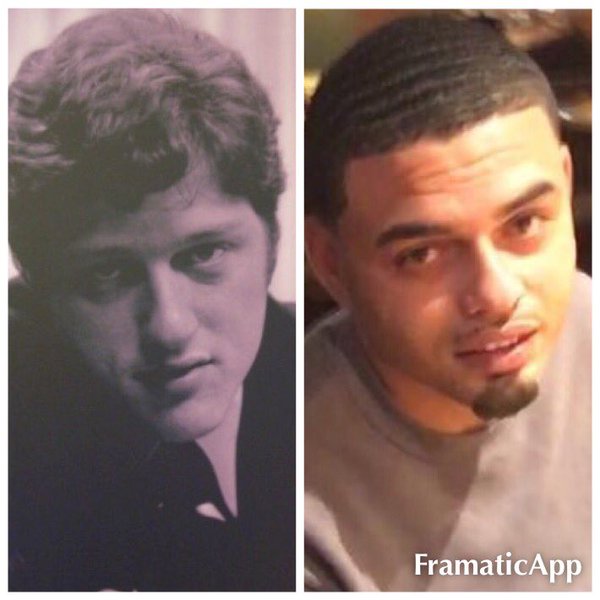 Lit by a story carried by the Drudge Report this morning, the internet is aflame with allegations that Bill Clinton fathered an illegitimate son with a prostitute in 1983 while he was governor of Arkansas.

The story itself isn’t new. In fact, the allegations about now 30-year-old Danney Williams first surfaced in 1992 when Clinton was running for president.

The Daily Mail says, The Globe interviewed Danney’s mother, a former prostitute named Bobbie Ann Williams, who told the story of how she allegedly met and began a relationship with Clinton in 1984.

My name is Danney Lee Williams, I am the son of former president @billclinton. Please help me get this message to my father. #BillClintonSon pic.twitter.com/KaGNVXDUeQ

She says Clinton went out for a run one day in Little Rock, when he jogged by her housing project and introduced himself to her. She was 24 years old at the time.

A few days later, Clinton allegedly jogged by the housing project again and paid Bobbie $200 for her to have sex with him behind some bushes.

After that, Bobbie says that she and Clinton regularly had sex, sometimes alone, sometimes with other female partners.

Eventually, Bobbie became pregnant and she suspected that it was Clinton’s child.
But when she told the governor, he allegedly laughed in her face.

And yes, we have tested the DNA – @danney_williams is absolutely Bill's son pic.twitter.com/XggNhp0DlJ

‘He rubbed my big belly and said, “Girl, that can’t be my baby.” But I knew it was. I just had this kind of woman’s feeling that this was his child.’ Bobbie told The Globe.

She became even more sure when she gave birth to the baby boy on December 7, 1985, because the boy’s skin tone was so light. Bobbie says her son could only be Clinton’s because he was her only white client at the time she got pregnant.

From a 1999 article, the Ether Zone says the Williams rumor reached a fevered pitch in the 1992 presidential campaign when Steve Dinari, director of Ross Perot’s Illinois campaign, was ready to go public with a credible allegation that Bill Clinton had fathered an illegitimate son. The rumor was quickly squashed by George Stephanopoulos who threatened Dinari with, “I guarantee you that if you do this you’ll never work in Democratic politics again.”

In 1999, The Star magazine paid Bobbie Ann Williams for her son’s blood samples. Supposedly the magazine compared the results of the tests with the FBI analysis of the president’s blood in the report by Kenneth Starr, the independent prosecutor (who was using the blood samples to match the DNA on Monica Lewinsky’s dress “stain.”)

The Star’s test was negative. However…

Ether Zone says, To this day the FBI will not say that its lab report accurately portrays President Clinton’s DNA profile, or whether that profile may have been altered in documents released to the House Judiciary Committee for reasons of national security or privacy.

If Clinton’s DNA was in any way camouflaged in the report, The Star’s test would have been inaccurate anyway.

Noted Connecticut criminologist Dr. Henry Lee told the New York Daily News that the polymerase chain reaction (PCR) that the FBI used to match Clinton’s DNA to the stain on Monica Lewinsky’s dress would be inadequate to prove paternity in the Danny Williams case. “You can use the PCR test to exclude President Clinton or to say he could be (Danny’s father).”

So we still don’t know the truth. But just add it to the list of infidelities and scandals surrounding the Clintons. And if you really want to make your head spin, you can read up on the questions about Chelsea’s paternity…

[Note: This article was written by Michele Hickford]