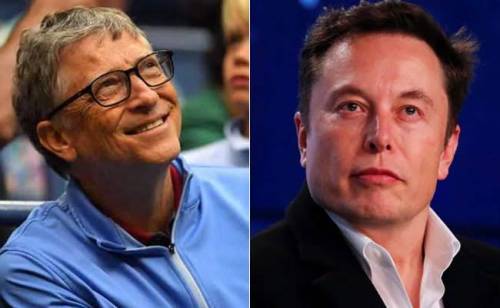 Microsoft founder Bill Gates has warned that his billionaire rival Elon Musk could potentially make Twitter a worse platform – and refused to say whether or not he shorted Tesla, as Musk has alleged.

Gates said that while Musk has a good track record, he could make misinformation on the platform worse.

‘He actually could make it worse,’ Gates said. ‘That’s not his track record. His track record with Tesla and Space X is pretty mind-blowing at putting together a great team of engineers and taking people who work in those fields in a less bold way and really showing them up. I kind of doubt that’ll happen this time but we should have an open mind and never underestimate Elon.’

But Gates did question Musk’s intentions with the app.

The South African-born billionaire has said his purchase of Twitter is motivated primarily by a wish to restore the app as a place for the free exchange of ideas, and has repeatedly said he wants to move away from ‘censorship’ and err on the side of free speech.

Musk, who calls himself a free speech absolutist, has criticised Twitter’s moderation policies.

‘You know, what’s his goal?’ Gates asked. ‘When he talks about the openness, how does he feel about something such as “vaccines kill people” or that “Bill Gates is tracking people” is that one of the things he feels should be spread? So It’s not totally clear what he is going to do.’

‘Are his goals for what it ends up being, does it match this idea of less extreme falsehoods spreading so quickly, weird conspiracy theories, does he share that goal or not?’ Gates pondered.

Gates also added that he has not taken Musk’s recent tweets about him personally.

Last month Musk dissed Gates’ gut on Twitter posting a photo of the Microsoft mogul alongside Apple’s controversial pregnant man emoji ‘in case you need to kill a boner.’

Gates also refused to say whether or not he personally shorted Tesla, saying that climate change was a focus of the Gates Foundation.

‘It’s possible the stock went down and whoever shorted the stock made money, I don’t know,’ he said.

‘I don’t think whether one’s short or long Tesla is a statement about your seriousness about climate change,’ he added. ‘I applaud Tesla’s role in helping with climate change. I have nothing but positive things to say about Elon, if he makes Twitter worse, fine, I’ll speak out about that, but I wouldn’t assume that’s what’s going to happen.’

Gates, the world’s third-richest man after Musk and Jeff Bezos, took a shot earlier this year at the Tesla CEO after the electric vehicle maker announced taking a $1.5 billion stake in Bitcoin.

‘Elon has tons of money and he’s very sophisticated, so I don’t worry that his Bitcoin will sort of randomly go up or down,’ Gates told Bloomberg.

‘I do think people get bought into these manias who may not have as much money to spare, so I’m not bullish on Bitcoin. My general thought would be that if you have less money than Elon, you should probably watch out,’ he said.

Gates has also previously made comments about electric trucks like the Tesla Semi not being viable, which Musk countered.

In an interview on the Joe Rogan Experience, Musk said he believes that the Microsoft founder had a big short position on Tesla stocks at one point.

‘I heard that at one point he had a large short position. I don’t know if that’s true or not, but it seems weird,’ Musk told Rogan.

‘People I know who know the situation pretty well, I asked them “are you sure?” and they said “yes, he has a huge short position on Tesla.” That didn’t work out too well.’

The tweet came hours after it was reported Musk is poised to collect a $23billion bonus after electric car company Tesla reported its record quarterly profits.

Critics have questioned why Musk, who has enough money to change ‘the fabric of American society’ has instead decided to spend it on a social media platform.

‘It would just be nice if Musk decided to get on board with humanitarian efforts and spend more money on something meaningful, let’s say this country’s blights of homelessness and poverty. Instead, he bought Twitter,’ wrote Suzette Hackney in an OpEd for USA Today.

When asked why he has not spent the $44billion on charity, philanthropy or to do ‘more good’, Musk told Entertainment Tonight: ‘Well I do a lot of things philanthropically and really my companies are intended to do good for the future of humanity.’

Musk pointed to his companies, noting how Tesla aims to ‘accelerate the advent of sustainable transport and energy’ while Space X is ‘providing internet to the least served people around the world’.

Musk added: ‘We’ve also been able to help Ukraine with the Starlink terminals and give them connectivity in some of the hardest-hit areas.

‘Aspirationally I am trying to do good for humanity and the future of civilisation.’