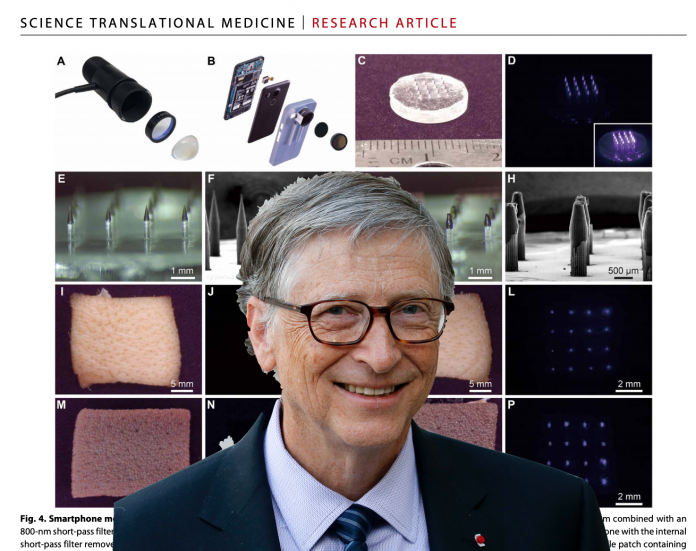 Why is the world suspicious of Bill Gates? Well the answers are not too hard to find. Bill Gates actually funded research in 2019 that developed an invisible implanted technological device that tracks vaccinated and can be scanned with a cell phone. The study was published in the journal Science Translational Medicine.

Science Alert in its article of December 2019 captioned “An Invisible Quantum Dot ‘Tattoo’ Could Be Used to ID Vaccinated Kids” describes:

“The invisible “tattoo” accompanying the vaccine is a pattern made up of minuscule quantum dots – tiny semiconducting crystals that reflect light – that glows under infrared light. The pattern – and vaccine – gets delivered into the skin using hi-tech dissolvable microneedles made of a mixture of polymers and sugar.”

The publication by scientists from the MIT is captioned, “Biocompatible near-infrared quantum dots delivered to the skin by microneedle patches record vaccination.”

“Accurate medical recordkeeping is a major challenge in many low-resource settings where well-maintained centralized databases do not exist, contributing to 1.5 million vaccine-preventable deaths annually. Here, we present an approach to encode medical history on a patient using the spatial distribution of biocompatible, near-infrared quantum dots (NIR QDs) in the dermis. QDs are invisible to the naked eye yet detectable when exposed to NIR light. QDs with a copper indium selenide core and aluminum-doped zinc sulfide shell were tuned to emit in the NIR spectrum by controlling stoichiometry and shelling time. The formulation showing the greatest resistance to photobleaching after simulated sunlight exposure (5-year equivalence) through pigmented human skin was encapsulated in microparticles for use in vivo. In parallel, microneedle geometry was optimized in silico and validated ex vivo using porcine and synthetic human skin. QD-containing microparticles were then embedded in dissolvable microneedles and administered to rats with or without a vaccine. Longitudinal in vivo imaging using a smartphone adapted to detect NIR light demonstrated that microneedle-delivered QD patterns remained bright and could be accurately identified using a machine learning algorithm 9 months after application. In addition, codelivery with inactivated poliovirus vaccine produced neutralizing antibody titers above the threshold considered protective. These findings suggest that intradermal QDs can be used to reliably encode information and can be delivered with a vaccine, which may be particularly valuable in the developing world and open up new avenues for decentralized data storage and biosensing.”

The funding of the research:

“Funding: This work was funded by the Bill & Melinda Gates Foundation grant OPP 1150646.”

See clips of images of the invisible microtechnology from the article: