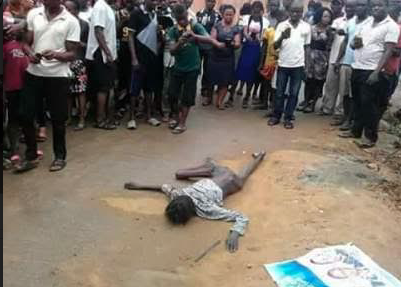 PORT HARCOURT – There was pandemonium on Thursday as a bird transformed into a human being in Port Harcourt, the capital of Rivers State.

The incident which happened around 8:00am at Agip/Ada-George junction attracted huge crowd from every part of the city.

It was learnt that the bird turned into a lady after it was electrocuted by a high tension wire.

An eye witness, Promise Amadi, who confirmed the incident claimed that the bird was on top of a high tension pole by the junction when suddenly electricity company restored power.

Amadi noted that the bird was electrocuted as power was restored and that was when its fell and instantly turned into an unidentified lady with cowries around her neck.

He stated that other birds that flew to the point numbered over ten and that when eventually the unlucky one fell that the others escaped.