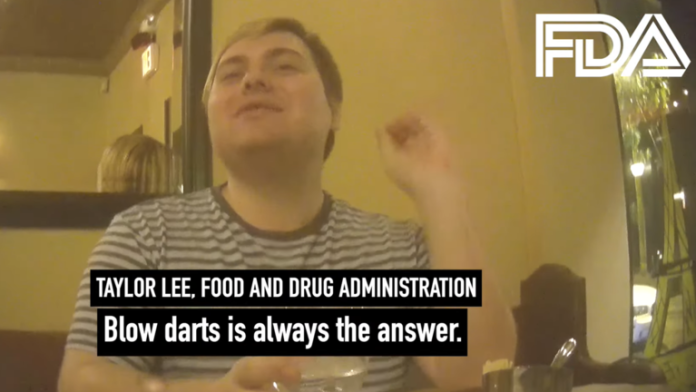 Conservatives are up in arms after a Food and Drug Administration (FDA) employee was caught on camera advocating forced vaccination for minorities and a Nazi-style register of the unvaccinated, “like the Jewish star.”

FDA economist Taylor Lee told an undercover reporter with Project Veritas that the federal government could learn a thing or two from the Nazis when it comes to getting the population vaccinated, according to a video published by the conservative group – famous for its hidden camera sting operations – on Wednesday.

Lee suggested that “census goes door-to-door” looking for vaccine holdouts, and when someone without the shot is found, they “blow [the Covid-19 vaccine] into them. Blow dart it into them.”

“I think, at that point, I think there needs to be a registry of people who aren’t vaccinated,” he continued. “Although that’s sounding very [much like Nazi] Germany. Nazi Germany… I mean, think about it like the Jewish star.”

Lee’s fantasies of forcible vaccination got darker, as he told the Veritas reporter: “I’m gonna go door-to-door and stab everyone [with the vaccine], ‘Oh, it’s just your booster shot! There you go!’”

Regarding minorities (African-Americans are more likely than whites to be unvaccinated), Lee had the same solution: “Blow darts is always the answer.”

While blacks can point to a history of medical experiments being performed on them against their will, Lee said that he “can’t blame them” for their hesitancy to get vaccinated, “but at the same time, like, blow dart. That’s where we’re going.”

Project Veritas’ videos have been criticized by liberals for their allegedly deceptive editing, and the subjects are often filmed on dates with undercover reporters, where alcohol and bravado make them more likely to run their mouths and exaggerate. Nevertheless, conservatives were incensed, with one commenter stating that although Lee is not a senior official at the FDA, “I have a feeling the blow dart dude’s disdain for ordinary Americans is shared by many in the @FDA.”

It's crazy to me how the new Project Veritas video can be dismissed as "he's just a dude that isn't that high up in the USDA" when he's literally saying they should blow dart people with the vaccine. IDAF where is in rank. It's fucked up and it should be national news

Good morning to everyone except the absolute psychopaths on the left that want to blow dart us with their horrible vaccine.

So am I right when I say
Project veritas just exposed an FDA staffer for seeing the black American community as nothing more than a covid vaccine trial and not a single liberal or leftist media source is saying anything? Really? He called African Americans covid trials ffs!

Project Veritas’ video was deleted from Instagram, and at time of writing remains available on YouTube. Both Project Veritas and its founder, James O’Keefe, were permanently banned from Twitter earlier this year.

The group has continued to publish sting videos, however, and earlier this week released another hidden-camera expose, in which a doctor with the Department of Health and Human Services (HHS) accused the federal government of suppressing reports of the harmful side effects of the Covid-19 vaccines, saying the shots are “full of s**t.