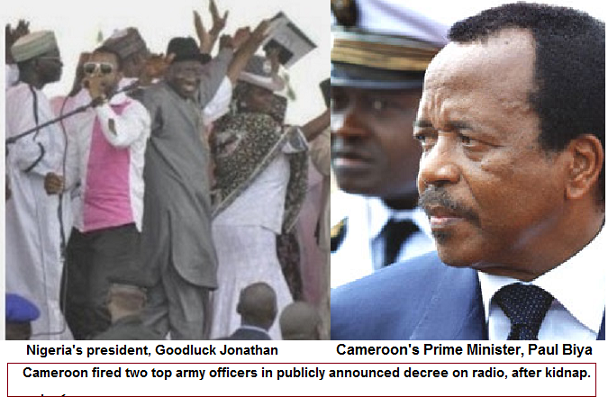 In latest reports, Cameroon’s army has again scored great victories over Boko Haram. In what appears to be a cross-border raid, Cameroon as reported by Cameroonian investigative journalist, Bisong Etahoben, has destroyed over 100 Boko Haram vehicles and killed scores of terrorists.

“If We Were Allowed to Chase Boko Haram into Nigeria, Insurgency Would Be History”, – Cameroon Army spokesman Lt-Col Badjeck Didier

As Cameroonian military deliveres devastating blows and defeats Boko Haram, just killing over 1000 terrorists and destroys dozens of the terrorists’ vehicles; the Cameroonian army spokesman, Lt-Col Badjeck Didier just said: “If we were allowed to chase BH into Nigeria, the insurgency would have long been history”.

The statement damns the Nigerian military effort under the current Goodluck Jonathan administration. Nigeria’s army has failed for unknown reasons to ever score the type of gains the Cameroonians so easily achieve over Boko Haram terrorists. Nigeria has remained in a defensive position and despite having all access to Boko Haram hideouts, refuses to diminish the terrorists capacity as Cameroon proves to easily be able to whenever the terrorists venture across their border.

The recent messages and Cameroons morale posts on the Boko Haram war can be seen in Chief Bisong Etahoben’s texts. 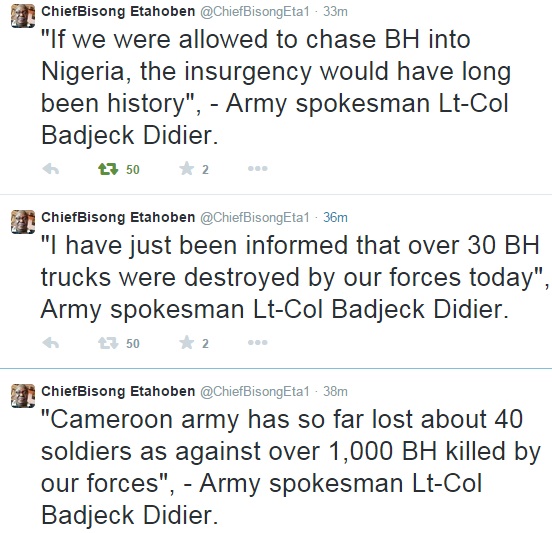