Increasing Boko Haram attacks on student and schools in Nigeria is an evidence of  the sect’s intention to damage the north’s prospects, says the National Association of Nigerian Students (NANS).

The Coordinator NANS Zone A, Abdurrahman Bala, said this in a statement made available to Student Pulse on Tuesday.

He condemned the activities of the Boko Haram.

“On behalf of the entire students of the North, I hereby condemn on strong terms any attack carried on students, schools, or on the general masses in whatever guise.

“We suspect it is a plot to main the prospect of the north and it teeming youth by causing general degradation and killing the dreams of our fathers.”

The students leader condoled the families, schools management, friends and well wishers of the victims of the  30th of July bomb explosion which occurred at the Kano Polytechnic, killing some student who went to check the NYSC mobilisation list.

“May Almighty Allah repose the soul of the deceased and grant the bereaved the fortitude to bear the lost,” he said.

Bala also hailed the appointment of IG Aba Sule as the new Inspector General of Police.

He urged “students to remain calm and be vigilant in their respective campuses”. 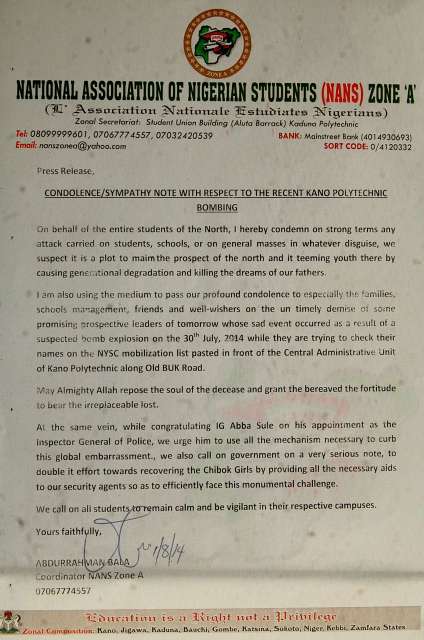