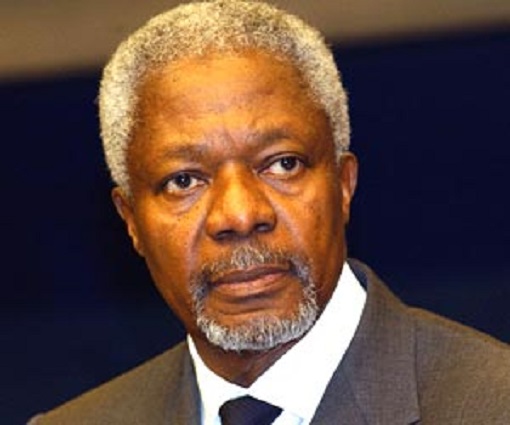 A former Secretary General of the United Nations, Kofi Annan, has said that Nigeria needs to brace up and tackle the extremist group, Boko Haram, before seeking foreign intervention.

Mr. Annan said international help could only come after, but that it is the primary responsibility for Nigeria and the West African region to defeat Boko Haram.

The former UN secretary general spoke on Wednesday in Abuja at a media briefing in Abuja.

Condemning the latest attack in Baga where over 2, 000 people were reported killed, Mr. Annan said it is important that the country and the West African region take responsibility towards ending the consistent insurgent attacks and depend less on the international community.

“When the last incident occurred, although we are getting different figures, some have said its 2, 000, others said its crossing a hundred, regardless of the numbers it was a brutal act to commit.

“What is important is that we ourselves should organize and try and contain Boko Haram, the international community can only assist. It can come but the responsibility is ours,” he said.

Mr. Annan said conducting a free and fair election in Nigeria has a great effect of ensuring peace and security in the West African region.

Concerning inciting speeches during electoral campaigns, Mr. Annan said it is important for parties and their various leaders to take the lead concerning the kind of statements they and their followers make.

He said statements that may lead to violence before, during and after the elections must be avoided, stressing the need for an issue-based campaign by politicians.

He also said every attempt must be made to allow citizens to exercise their rights to vote during the upcoming 2015 election saying Nigeria’s Independent National Electoral Commission’s Chairman, Attahiru Jega has informed him that he is hopeful that the Internally Displaced Persons exercise their civic rights.

He advised Nigerian youth to endeavour to vote.

“I’ll advise those frustrated to think it through and exercise their right. Resigning and standing back and not voting does not solve the problem,” he said.

Mr. Annan also clamoured for the expansion of civic education in schools in the region through school teachers, this he said could involve parties and party leaders, school teachers.

He visited Nigeria to address a conference organized by a coalition of Nigerian civil society organization on elections issues.

Mr. Annan chairs the Kofi Annan Foundation which focuses its work on Peace Security, sustainable development, human rights and to the rule of law with the aim of helping to create a fairer, more secure world. The foundation also promotes impartial and transparent electoral processes through its Electoral Integrity Initiative.