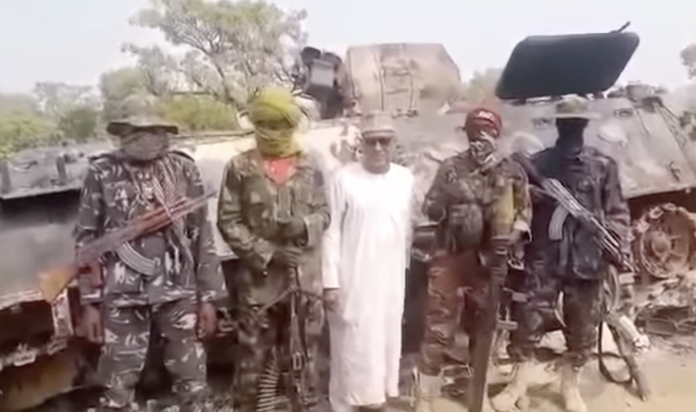 Early evidence suggests that ABJ-KD train attackers are Boko Haram. In this video, they released the MD of Bank of Agric because “he’s old and it’s Ramadan”. They said government should work to free the remaining victims quickly or they would “turn their abode into an abattoir”. They said they’re not after ransom and that govt knows what they want. Judging from their language and posture, these are not bandits. They are likely members of the Ansaru faction of Boko Haram and their demand is likely the release of their leaders who have been in detention for long.

The Managing Director of the Bank of Agriculture, Alwan Ali-Hassan was on Wednesday set free by terrorists who attacked a Kaduna-bound train after his family paid N100 million as ransom, SaharaReporters has gathered.

Ali-Hassan and others were abducted last Monday, March 28 by terrorists who bombed the Kaduna-bound train carrying over 362 passengers.

Eight people were confirmed killed and 26 others injured in the attack.

The Nigerian Railway Corporation (NRC) while confirming the incident, said about 362 passengers were on board the ill-fated train.

According to the NRC, while about 182 have safely reunited with their families, about 162 other passengers remain missing.

A source close to the family said Ali-Hassan was released after paying a ransom of N100 million.

The terrorists had initially demanded a ransom of N200 million, SaharaReporters also learnt.

The source added that a mansion belonging to the BOA boss was sold to raise the money.

“They sold his house for millions to pay his ransom. They collected N100 million, though they initially asked for N200 million.

“The house was sold for more than N100 million but we are happy he is back with us. According to him, those who abducted him were not normal Fulani bandits but Boko Haram members judging by their accent,” the source said.