During the 2012 inter-denominational service which held at the National Ecumenical Centre to mark the 2012 Armed Forces Remembrance Day, President Goodluck Jonathan made the following statement as regards members of the deadly Boko Haram terrorist sect invading his government:

“Some are also in the armed forces, the police and other security agencies.

“Some continue to dip their hands and eat with you and you won’t even know the person who will point a gun at you or plant a bomb behind your house.”

What you have just read is a quote of President Jonathan’s remark at that solemn event to honour the memory of our fallen heroes.

The president till date has not arrested any member of this terrorist sect he eats and dines with because they are too close for him to prosecute. In fact, it will be an indictment of his government.

Recently, the hidden secret as to the identity of one of the Boko Haram members in President Jonathan’s camp was exposed when his Special Assistant on Social Media, one Reno Omokri, forgot to cover up his digital signature in one of his many cover-up stories to mask the activity of his sect.

In a bid to cover up a massive scandal in the Nigerian National Petroleum Corporation where $20 billion was alleged to have been missing by the erstwhile governor of Nigeria’s Central Bank, Mallam Sanusi Lamido Sanusi, Mr. Reno Omokri informed his Boko Haram sect to increase the “tempo” of their strikes so that he can conveniently link the whistle blower to the deadly sect.

Alas, the diligence of some social media activists uncovered the sinister plot.

In the alias conjured by Reno Omokri to cover up his sect’s activities, he wrote a malacious article with a pseudonym Wendell Simlin, titled Increased Tempo of Boko Haram/Terrorist Activity in the Wake of the Sanusi Saga, which is produced below verbatim:

In the wake of the saga involving the suspended Governor of the Central Bank of Nigeria, there has been an increase in the tempo of terrorist activities carried out by the Islamic Terrorist sect, Boko Haram.

Taken together with some historical facts, there is a strong case that this increase in tempo and other activities are not coincidental.

The following Timelines may throw some light on the likely linkages;

It is a historical fact that Malam Sanusi Lamido Sanusi was implicated in the Gideon Akaluka beheading affair of 1995 and was subsequently arrested in Kano and detained by the Abacha administration in Sokoto, Sokoto State.

Sanusi was released after the intervention of (amongst others) Alhaji Umaru Abdul Mutallab.

Alhaji Mutallab used his influence to place Sanusi comfortably in the banking sector beginning with the United Bank for Africa
from where he moved to First Bank where he (Mutallab) was chairman.

Malam Sanusi rose within the ranks, aided by his relationship with Mutallab, until he was nominated by President Yar’adua and confirmed by the senate as the Governor of the CBN in 2009.

It is pertinent to note two incidences that cannot be coincidences. The son of Alhaji Umaru Abdul Mutallab (Farouk Abdul Mutallab) eventually entered into infamy when he was arrested and tried for attempting to detonate an under wear bomb on a Northwest Airlines flight into America. Farouk Abdul Mutallab became radicalized after he had gone to study Sharia and Islamic studies in Yemen in 2009.

This was exactly the same trajectory earlier taken by Sanusi Lamido Sanusi who schooled at the International University of Africa in Khartoum, Sudan in the mid 1990s while Osama Bin Laden was also a resident of the city.

While Reno Omokri was writing this fictitious story, his sect truly intensified the “tempo” of their terror. 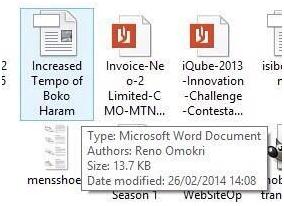 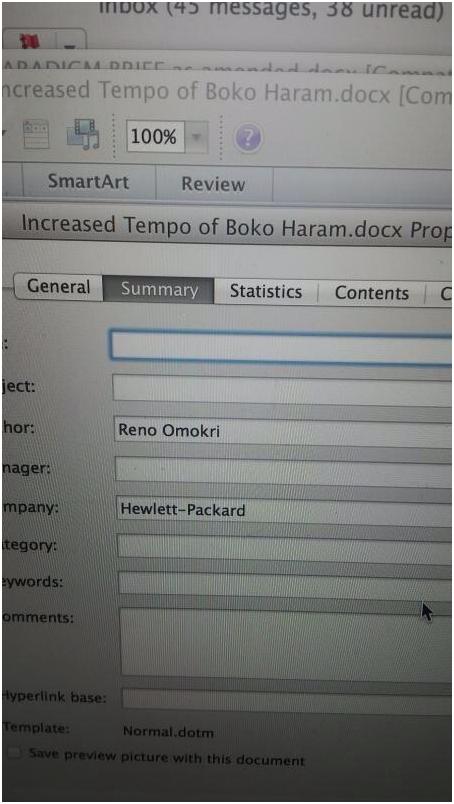 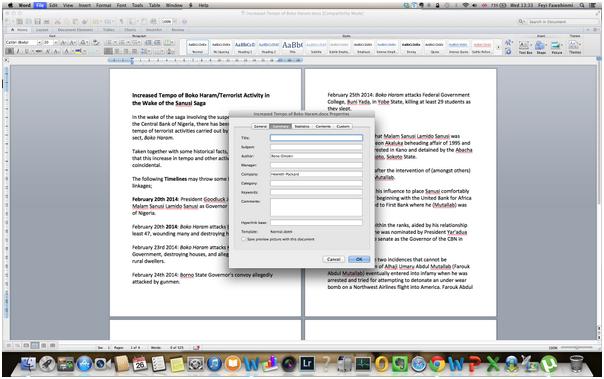 It could also be recalled that when the former Minister of Aviation Stella Oduah was facing a terrible public outcry over the purchase of armoured cars at over-bloated prices, there were “increased tempo” of the sect’s activities.

Investigation reveals that the services of Reno Omokri’s sect may have been employed to distract Nigerians from the scandals.

Also, shortly after Justice Ayo Salami was removed on August 16 2011, there was public outcry and massive protest over his removal. If we are to go by the trend we have seen in recent times, Reno Omokri’s sect was likely contacted to carry out the UN building bombing on August 26, 2011 just 10 days after Justice Salami’s removal so as to distract Nigerians.

I can connect several “increased tempo” in the strikes of Reno Omokri’s sect to periods of public anger against his principal’s regime.

We call on President Jonathan to not only sack Reno Omokri, but also subject him to thorough investigation.

The National Intelligence Agency, Department of State Security, the military and other sister agencies must conduct a thorough investigation of Reno Omokri’s connection to the deadly Boko Haram sect.

Anything short of this is a disservice to the 10,000 Nigerians who have been killed so far during the sect’s activities.

Anything short of this is a disservice to the memory of our gallant officers in the JTF, Military, DSS, Police and Civil Defense, who continue to sacrifice their lives that we may live in peace and freedom.