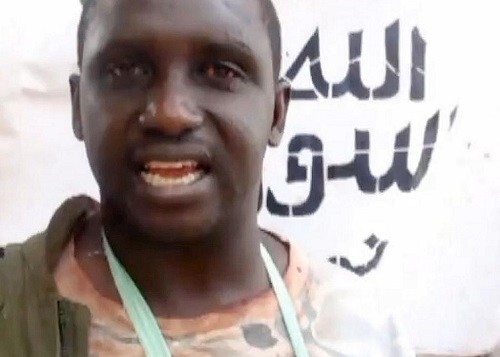 Abusidiqu-A new video allegedly shows the beheading of a man who identifies himself as the pilot of a missing Nigerian Air Force jet.

The two pilots manning the jet have also not been found.

But the video shows one of the pilot and burnt out plane parts with Nigerian military markings, the first indication that Nigeria’s homegrown Islamic extremists have the capability to shoot down aircraft.

According to tweets by Mr. Aye Dee, who seems to have access to happenings in the circle of the sect and have watched the video, the man beheaded with an axe identifies himself as a wing commander, Army Equivalent of a Lieutenant-Colonel, saying he has not seen his second pilot since the jet was shot down.

Before he was beheaded, the pilot of NAF 466 was seen kneeling, Said Mr. Ayee Dee.

The tweets by Mr. Aye Dee which he said are the man’s last words are as follows:

“On September 11, 2014 I was assigned on a mission to Kawuri, Borno state. During the mission we were shot down and our aircraft crashed.”

“To this day I don’t know the whereabouts of my second pilot. I haven’t seen him since then”

“At the time of the crash I sustained cuts and broken hand and some other injuries to the head.”

It was at this point that he was forced to the ground and his head chopped off with a pick axe.

The video was made available to the AP through the usual channels and seems to show the same man who appeared in previous videos.