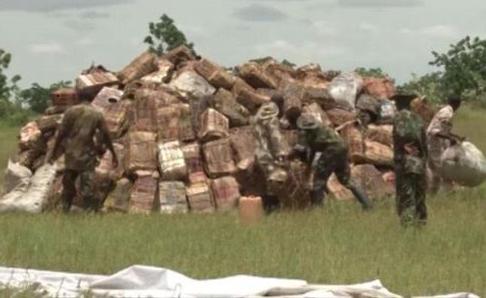 The military has seized over 2,000 cartons of smoked fishes and many bags of dried meat worth about N50 million from Boko Haram.

“The 7 Division Nigerian Army has apprehended several cartons of dried fish from suspected Boko Haram terrorists in various locations in Borno State. The cartons of the dried fish are believed to be seized from innocent fishermen and business men by the terrorists who later sell them at ridiculous mount to finance their terrorists’ activities,” he said yesterday in Maiduguri while burning the fishes.
Gusau said the ongoing military operations in the northeast have crippled the activities of Boko Haram, adding that the operation has compelled the insurgents to resort to using donkeys and other unusual tactics to attack some remote communities.

“We have crippled their channels of supply both of fuel, logistics and everything and they’re now in disarray. That is why they resorted to using donkeys to carry out attacks,” he disclosed on Friday during the burning of over 2, 000 cartons of smoked fishes and dried beef confiscated from Boko Haram.

He solicited for the support of  members of the public for useful information that could assist in ending insurgency in the country.

“By burning of this fishes, we’re sending strong message to the insurgents to change their terror act because an end is at sight. We’re determined with the support of patriotic Nigerians to end Boko Haram and other terror acts in the country,” he added.