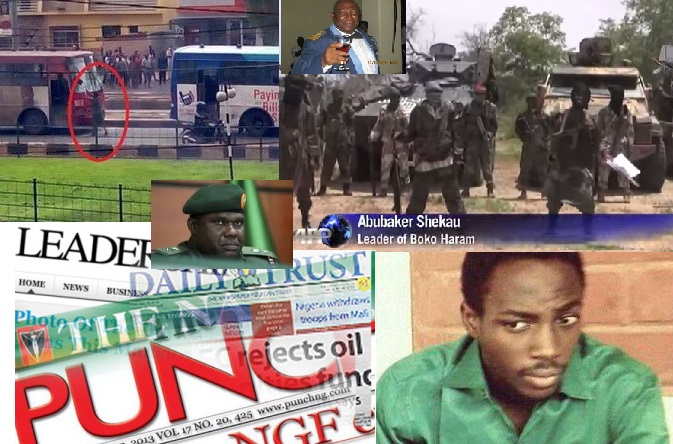 There have been too many putrid reports of gross incompetence, recklessness, inefficiency all the way to frank support and assistance to Boko Haram, in the Nigerian military engagement in the devastated northeast. Global media and US hearings have all highlighted treacherous conduct of our men in uniform. Army helicopters have been reported giving cover to terrorists and supplying them. And if we did not believe this, the series of Nigerian army APC’s, light weight tanks and stashes of ammunition that Boko Haram displays in their background in their videos is enough evidence of the betrayal of the Nigerian army and its support of terror. This last bastion of hope in Nigeria has become our greatest burden, now directly and indirectly aiding terror.

If we felt too far away from the plagued northeast and entire north by extension to notice the menace the army has become, we were directly informed of it, or dare we say, uninformed when our newspapers were seized from newspaper stands, depots and trucks for several days this past June. It was barbarism at its finest. The army raided our dailies and made bonfires out of them claiming they were acting ‘on orders from above.’ [Na di burn, burn, na him dey sweet them pass, – Sage Fela]

But the janjaweed behavior of our new berserk military was hardly fully appreciated. Barely a month after going crazy on the dailies, upon hearing that a Lagos state mass transit BRT bus driver had accidentally run over a military man on bike, perhaps riding on a BRT restricted lane, our dear mad military ‘took no prisoners,’ they burned the buses! They offloaded close to a dozen BRT transport buses worth millions and broke them to pieces and set them on fire. Yes, unthinkable, unimaginable but true; in Nigeria. The military took out their anger on the public transport buses. And knowing that their actions were insanely shameful and criminal, passerbys were told to raise their hands up so as not to record the incident on their phones. They were conscious of their crimes.

While Nigeria licked its wounds; while we lamented our abducted girls, 100 days with Boko Haram with a dysfunctional military unable to have prevented their abduction, rescued them immediately, rescued then days after or rescued them 100 days after; while we lamented thousands killed monthly and millions displaced; the massacre of Gamboru-Ngala; the loss of Damboa to Boko Haram and the blowing up of bridges linking Borno to our neighbors and the loss of power to Maiduguri as rag-tag, jungle hiding Boko Haram miscreant bandits continued to show superiority over the nations men in uniform on a quarter of the nation’s budget, the army struck again!

A peaceful procession that has held same time every year for decades was ambushed. Yes, like the LRA, is it – Joseph Kony rebel forces, the Nigerian army could not, according to reports, have patience for the legal procession to pass, they, again, perhaps on orders from above, rained bullets on the Muslim civilians. And for whatever reason, which defies logic and debars this incident of justifiable denial of intent, they selected three out of its leader’s sons and executed them. How did the military find only the leaders sons of thousands of protesters? According to the bereaved father, two sons who just came visiting from school abroad for the festive period were taken away alive and executed summarily as tanks were rolled out to meet the procession. Ah! A father’s agony, burying so many of his sons.

Who above is giving these orders? The Presidency never admits responsibility for the terrorizing and treacherous actions of the military, yet they claim they are always acting on orders from above; so who is it above that lacks a head that has turned our nation’s military into this hopeless assembly of terror thugs and rebel bandits? Is this what looting of billions of dollars does to a nation? Is this the result of executive and top military leadership massive corruption? Do these men still deserve the uniforms on their backs and the right to bear arms? What has Jonathan done? Lord, give us patience.