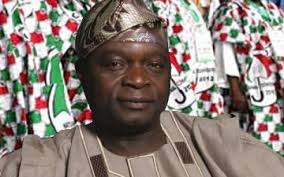 Former Governor Olagunsoye Oyinlola of Osun State has accused President Goodluck Jonathan of befriending all those accused in the murder of Bola Ige, a one-time Minister of Justice and Attorney General of Nigeria.

Mr. Oyinlola, who served as a governor on the platform of the ruling Peoples Democratic Party (PDP), made the declaration today while announcing his defection to the All Progressives Congress (APC).

He said the suspects in the killing of Mr. Ige were now confidants of President Jonathan or functionaries in his government.

Mr. Oyinlola, who was a former national secretary of the PDP, spoke in Osogbo today during the grand finale of the APC’s governorship campaign. The rally was televised life on Channels Television.

The former governor described the governorship candidate of the PDP, Iyiola Omisore, as a selfish person. A prince from Okuku, Mr. Oyinlola spoke in Yoruba Language at the rally that was attended by current Governor Rauf Aregbesola of Osun State as well as several APC governors and top officials. He said it was unfortunate that President Jonathan decided to pick those who had been accused of high-level murder.

“The chairman of the party in this state, Ayobami Olaoluwa, was also arrested. So, why is everyone who was in detention given appointment or put in a position of authority? We need to ask the government.”

He urged the voters of the state not to vote for Mr. Omisore on Saturday.

The former governor also accused Mr. Jonathan of discriminating against the Yoruba in many of the decisions he had taken.