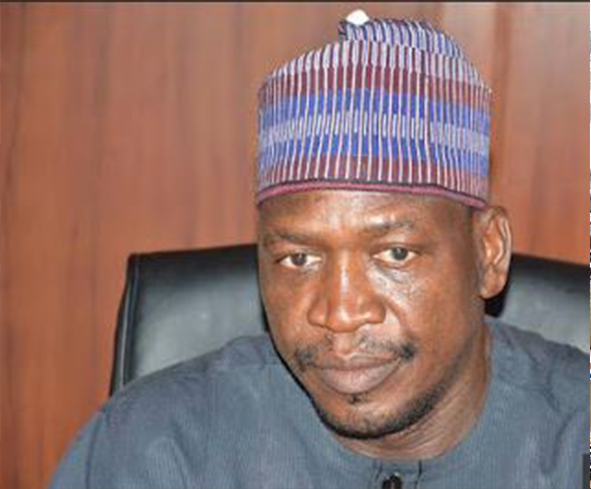 The governor of Boko Haram-plagued Borno state has selected the state former Religious Affairs commissioner, Usman Mamman Durkwa as his new deputy. Durkwa, a close political associate of Governor Kashim Shettima and a politician from the Southern Borno Senatorial District, served as commissioner in various ministries during the eight-year tenure of former governor Ali Modu Sheriff before becoming Shettima’s Commissioner Religious Affairs and after the recent reshuffle, for Poverty and Youth Affairs.

Governor Shettima Was At Odds With Deceased Deputy, Long Wanted Usman Mamman Durkwa To Replace Him

This appointment fulfills a years-long plan to replace the former deputy governor who died of a “sudden death” this August with the Religious Commissioner of the state, Usman Mamman Durkwa.

According to a report since February 2013,

…An inside source revealed that the ultimate plan of the Governor who seems to have bowed to pressure from political- hangers- on is to ensure the impeachment of the Deputy Governor before the end of the current administration and bring on board the current commissioner for Religious Affairs Hon. Usman Mamman Durkwa. A member of the state Assembly hinted, “some principal officers of the House have since been contacted with a view to commencing an impeachment process against the Deputy Governor.” According to the Legislator “most members of the Borno state House of Assembly are aware that the former Deputy Governor of Taraba State was impeached after the legislators received N35Million each from the executive, so if same gesture is extended to us we may have to do same.” Pointblanknews.com also gathered that former Governor Ali Sheriff is not leaving anything to chance as he was said to have perfected plans to ensure that the Deputy Governor is not impeached. In fact sources are of the opinion that Sheriff is set to shower millions of dollars on the Lawmakers to abort any impeachment move.

Borno Late Deputy Governor And Commissioner Who Replaced Him After Death Were At War: Had Threatened To Kill Commissioner

In June of 2013, newspaper headlines had it that the now deceased deputy governor and his replacement, then commissioner of Religious affairs were at a bitter war. Their supporters are known to frequently clash in public.

With the death of the former deputy governor Alhaji Zanna Umar Mustapha, who died this August “in his sleep” while in Yola, capital of Adamawa state, the stage was perfectly set for his stark opponent and rival Religious commissioner Usman Mamman Durkwa who Shettima had planned to make deputy to assume the throne.

Borno state governor has been serially accused by his former boss, Ali Modu Sherrif of being behind sudden deaths of several state officers including their then ANPP Party gubernatorial candidate, Engr. Modu Fannami Gubio who was killed before elections paving a path for Shettima to become the Party’s candidate and governor of the state.

The former governor also accused current governor Shettima of being behind the death of Alhaji Awana Ngala, who was the preferred candidate to succeed Ali Modu Sheriff.

We cannot substantiate all these allegations from Modu Sheriff’s camp, however there is almost certainly more than meets the eye in the blood-laden Borno state.

Governor Shettima has admitted knowing those behind Boko Haram terror but said he was “keeping mute so their heads do not roll.”

Religious Commissioners, Advisers In The Past Arrested, Killed For Boko Haram Activities

Likewise it is recollected that governor Shettima’s former Adviser Religious Affairs, Alhaji Junaid Idrissa Khadi, was also linked to Boko Haram and arrested in 2014. The governor claimed that he had selected the Religious Adviser on the request of his former boss, Ali Modu Sheriff.

The new deputy almost crossed to the PDP to join Modu Sheriff about a year ago, showing how close the new deputy and in effect the current governor who selected him still are to former governor Ali Modu Sheriff, accused of sponsoring Boko Haram.

The links between Boko Haram and Religious directors of the state cannot be overlooked in studying the unique success of the cult in Borno state.

The nominated deputy, Usman Mamman Durkwa was accused this past political period in March, leading-up to the presidential elections of having hired terrorists to burn PDP Posters and buildings.

Less than 24 hours to presidential and national assembly general elections, supporters of People’s Democratic Party (PDP) and the All Progressives Congress (APC) as well as non party members clashed and engaged burning posters, flags in Marama, a major town in Hawul local government area of Borno state. An eyewitness who was sketchy with details as to what led to the clash said “Marama is on fire as APC and PDP supporters are at war, fighting and burning each others’ flags, posters and party buildings”. The source added that vehicles and houses including that of the Council chairman, Dr. Andrew Malgwi was burnt down during the clash when it was apparently discovered that the Chairman including Commissioner for Poverty Alleviation, Alhaji Usman Mamman Durkwa hired some thugs suspected to be terrorists who stormed Marama town and started burning PDP posters and shelves.