Babalare Abbas told the kangaroo panel Monday that they (the government) buried the Muslim (mainly Shia) dead that the Nigerian Army killed during its raids at Gyellesu residence of Sheikh Ibraheem Zakzaky, Husainiyyah and the Darul Rahma grave yard in a mass grave in the area of Mando.

Mando is in the outskirts of Kaduna Town, more than 10 Kilometers from the scenes of the massacres.‪

As reported by NewsRescue, activists had found evidence of the mass graves at the same Mando cemetery grounds but until the confession today, the Nigerian government had not admitted mass burying the victims there or even having mass killed the Muslim victims.

The Nigerian army claimed it only killed 7 Muslims during the event.

However from his testimony, Balarabe Abbas admitted for the first time that a total of 191 + 156 = 347 were mass buried in the Mando cemetery.

The Islamic movement of Nigeria has claimed that about 1000 victims are missing. The ABUTH hospital earlier said it received about 300 bodies, but current totals are 191 from the army and 156 from ABUTH, to a total of 347 which the government confessed it buried enmass at Mando. The Islamic movement released a list of 705, now about 800 missing persons. The confession by the Kaduna state government accounts for about half of the missing 805.

The ABUTH medical director was speaking at the time of this report.

Another witness and Director-General, Kaduna State Interfaith Agency, Mr Namadi Musa, said the mass burial was conducted on Dec. 14 and Dec. 15, respectively, and it took the officials about six hours to complete the burial.

“The mass burial was authorised through a warrant of burial obtained from a Kaduna Chief Magistrates’ Court in Kaduna,’’ he said. 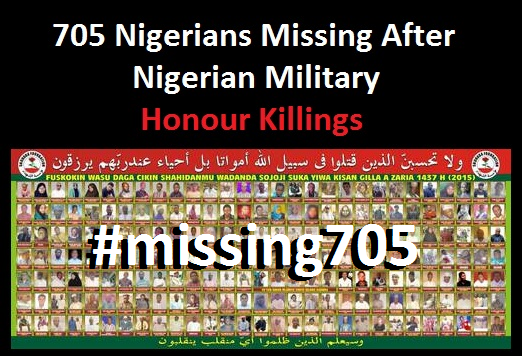