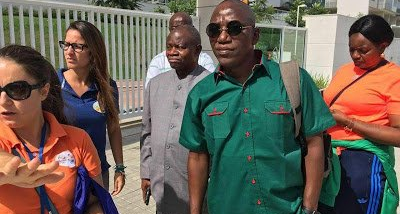 Three days to the end of the 2016 Rio Olympics, Team Nigeria took delivery of the much awaited kits after most of the athletes had concluded their events with some already back to their bases.

A top official of the Athletics Federation of Nigeria who disclosed this to Sports Vanguard Thursday, said the kits which arrived Wednesday night would no longer serve any purpose because “most of the athletes have left after concluding their events”.

He added that “I have never experienced this in my years in sports. Money meant for the Games was held tightly by ministry officials and they were just releasing money piecemeal. We had to buy kits on our own while some athletes competed in their personal kits.”

It would be recalled that Team Nigeria had to resort to their warm-up track suits for the match past of the Opening Ceremony as the sports ministry claimed the official attire which was showcased before President Muhammadu Buhari during the hand-over ceremony in Abuja failed to arrive on time for the ceremony.

Nigerians who were alarmed by the embarrassing scenario condemned the ministry for the untidy handling of the athletes’ kits but the sports minister, Solomon Dalung, in defence of the ministry, tweeted with a post that even the South African contingent appeared at the Opening Ceremony in their track suits.