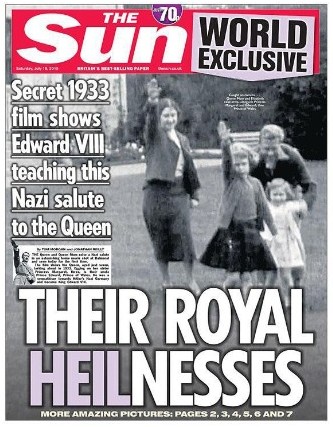 British Tabloid newspaper today Saturday July 18th published images showing a then six year-old Queen Elizabeth II giving a Nazi salute in the early 1930s. She was with her 3-year-old sister Princess Margaret and her uncle, who would later be crowned Edward VIII. The dramatic headline on the story read; Their Royal Heilnesses – a reference to the ‘Heil Hitler’ greeting used in Nazi GermanyBuckingham Palace released a statement through a spokesman saying “It is disappointing that film shot eight decades ago and apparently from HM’s (her majesty’s) personal family archive has been obtained and exploited in this manner.”
The Sun also published a separate explanation of why it decided to run the footage, saying the images must be seen in their historical context.

“These images have lain hidden for 82 years. We publish them today, knowing they do not reflect badly on our Queen, her late sister or mother in any way.

“They do, however, provide a fascinating insight into the warped prejudices of Edward VIII and his friends in that bleak, paranoid, tumultuous decade.”