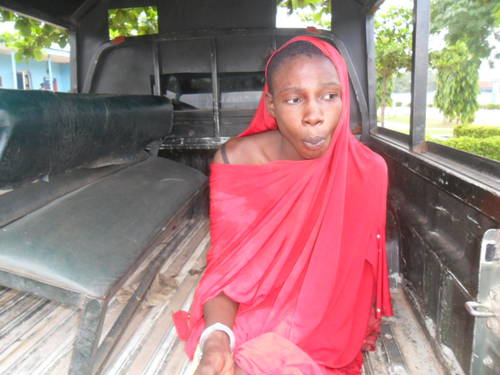 Nigerian troops are holding a man suspected to be connected with the explosion targeted at General Buhari on Wednesday. The young man who was apprehended by a military patrol team that swooped-in on the area immediately following the explosion, had found the suspicious character disguised as a woman. He was clad in female garb to exude femininity with a brassiere affixed to his chest.

The suspect was arrested while trying to fizzle and disappear into a crowd of onlookers when the patrol team arrived at the scene. Youths in the area attempted to mob him while he was being arrested but were restrained by troops who quickly whisked him away in an armored personnel carrier.

The suspect being held in custody; He is currently being interrogated by security agencies in a bid to ascertain his links.