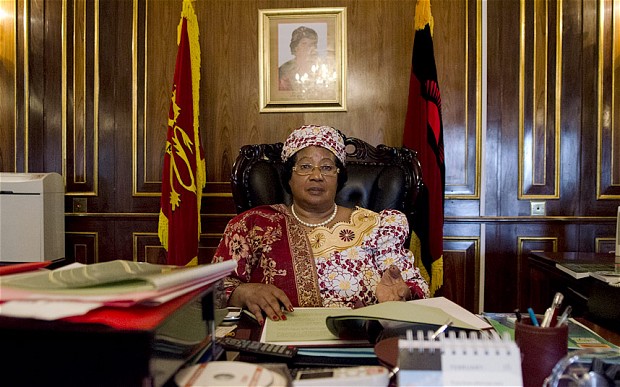 The President of Nigeria, Muhammadu Buhari ought to lower his conscience and learn from the President of Malawi, Joyce Banda who has recently declared to sell her Presidential planes and 60 Mercedes Limousines.

Her activity would imply that she would have none in her ownership and resort to flying commercial airlines, British Airways, and recovers the plane yearly running expenses of £220,000. a move extolled by a British bureau Minister, Andrew Mitchell.

In the mean time Nigerian President has been contemplating on selling his planes over a year back. A nation right now in subsidence overseeing more than 10 private planes with numerous God’s knows vehicles.

Buhari’s “Change starts with me” is an affront to Nigerians whose the President and his political party, All Progressives Congress have kept on calling fools with their non-verbal communication.

While trying to react to Prof. Farooq Kperogi who blamed President Buhari for spending six million pounds in the United Kingdom to treat ear infection, Presidency gladly disclosed that the President spent under fifty thousand pounds (£50,000). Which is N20,576,131.69 if converted to the present market value.

According to statement which was titled “Ear infection Treatment: President Buhari spent less than £50.000, not £6m” Presidency said “ The disclosure on Prof. Farooq Kperogi’s wall that President Muhammadu Buhari’s ear treatment in the United Kingdom cost a whopping six million pounds must have shocked many of the respected scholar’s followers.

“I’m prepared to share documents with Farooq, one of the brightest ever produced from the Bayero University Kano (BUK) that the whole treatment, including a follow-up visit by a specialist to Nigeria didn’t cost 50,000 pounds.”
The Presidency likewise included that the cash was bigger than 50,000 however the doctor gave back the parity and Buhari ought to be applauded for that.

“ For the records, the administration advanced a higher sum, but the President’s doctor returned the balance to the treasury.

“Indeed, it’s a New Day, and President Buhari’s change mantra is real. Let no one confuse my fellow countrymen and women.”

If this is what a man who flagged off a Change campaign few days ago requesting Nigerians to begin the change is egotistically promised, then i am embarrassed and disillusioned.

Once more, couple of weeks after his rise as the President, Buhari told Nigerians that he would lessen his pay by 50 percent however there are signs that the declaration was notwithstanding among the numerous untruths promises he had made to Nigerians.

According to Economic Confidential, Buhari Osinbajo including cabinet ministers pocketed the sum of N2.295 billion as salaries and allowances in 2015.

According to its analysis, it showed that Buhari and his vice salaries are still in tandem with the approval of Revenue Mobilisation, Allocation and Fiscal Commission which means Buhari may have just barked again without biting.

A detailed look at the report showed that Buhari received an annual basic salary of N3.51m while his vice, Prof. Osinbajo earned N3.03m. A President who claimed he was ready to forfeit half of his salary is also paid hardship allowance when Nigerians are advised to sleep on empty stomach.

If The estacode allowance for minister, SGF, Head of Service and chairmen of board is $1,000 per night, how much do you think Buhari and Osinbajo collect whenever they travel out of the country?

The report revealed that an average Nigerian worker with a minimum wage of N18,000 a month will have to work for more than four years before earning the utility allowance for ministers (remember not President Utility allowance).

One of the Buhari’s known liar, the Minister of Information, Lai Mohammed few days ago bamboozled Nigerians when he said no one was praising them (Buhari’s administration) for what they had done so far. This statement had got me thinking as i could not figure out what he was referring to. Everything the administration had done are what the previous administration by Goodluck Jonathan listed down to accomplish before they were pushed out by Nigerians who felt frustrated and wanted change that is now chain.

The most amusing part is the way Buhari’s administration assumes acknowledgment for thoughts they never breast fed, then call it continuity and shift the blame of the country to the same past administration when it turns bad.

Lai Mohammed who was making a public confession concerning his earlier attack on President Jonathan said “I have been on the outside and now i am inside and i understand the situation”. This statement by the Minister indicated that they insulted the previous administration without having their facts straight. He added “Any of them who comments, we just laugh at them because they have little understanding of the enormity of the problems government is confronted with”. Lai mohammed was responding to Senator Shehu Sani who recently threw his bow and arrow to Buhari that he hoped by the time the change Buhari promised would happen, all of us would have died.

While trying to defend Buhar integrity, Lai Mohammed foolishly added “The truth must be said; this is the time that Nigerians are better respected; this is when our green passport is starting to have value. Before now, we were all just crooks, 419 people (fraudsters) and drug smugglers. But today, you can see that because the President has integrity and is respected all over the world, you can see the reference given to him whenever he travels and that is what is percolating down. I have been to China and other places and I can see that it is not what it used to be before.

“Then again, a government cannot achieve everything in 15 months but you are already judging us as if we have been there for three years. Nobody is even giving us credit for being able to keep the ship of the state afloat.

“Nigerians are criminals” was the same statement Buhari used that annoyed many Nigerians to respond with photos and their detailed profiles.

I do not know what Lai Mohammed meant when he said they have been able to keep the ship of the state afloat. Is this afloat or the nation has sunk like Titanic?

Buhari has not shown any seriousness to change the situation the people are facing. Buhari’s daughter schooled in the United Kingdom and not Nigeria. How can this same President launch change in me when all he does is patronize anything else but Nigeria?

Reno Omokri, a former aide to the former President, Goodluck Jonathan who took a lash at the APC, Lai Mohammed and Buhari few days ago said while responding to Lai Mohammed who said Jonathan left Nigeria in a coma, adding that Buhari is reviving her said : Between ₦205 that GEJ left the Naira at and ₦423 that PMB put it, which represents a ‘coma’? Between ₦8,000 per bag that rice sold under GEJ and ₦22,000 it sells today which is symptomatic of a ‘coma’? Between ₦87 per liter for petrol under GEJ and ₦145 under PMB which price signifies ‘coma’? Between 9.6% inflation rate that GEJ left and 16.5% (and rising fast!) where PMB has it, which one looks like a ‘coma’? Between the free, fair and credible elections of the GEJ era and the inconclusive elections under PMB which one resembles coma? Between the 1.9 million jobs that even Lai Mohammed admitted that GEJ created and the 4.5 million jobs that the government’s own chief statistician admits has been lost under PMB which one indicates ‘coma’? Lai Mohammed should be aware that these are serious economic issues not masquerade dressing issues! If PMB cannot ‘change’ Nigeria, he should at least not spoil the transformation that GEJ gave us!

A former President, Mr. Olusegun Obasanjo popularly addressed as Baba had earlier made his view known on his expectation of President Buhari.

While addressing the crowed at the third International Conference on African Development Issues – themed, “Driving inclusive and sustainable development in Africa: Models, methods, and policies” – organized by Covenant University, Ota, Ogun State, Obasanjo said “ I will tell you what i know, and i will tell you what i don’t know. I know Gen. Muhammadu Buhari. He served under me in the military. His characteristics that i know, his behaviour that i know, he has not deviated from them. He was never a perfect man; he is not a perfect man, and no leader can ever be perfect because they are human beings. But if you read my book, what i said about him is correct. He is not a hot person when it comes to economy. He is not a very hot person when it comes to foreign affairs. But he will do well in matters of military, and he will do well in fighting Boko Haram”

The above quote credited to Obasanjo is an indication that Nigerian economy is likely to suffer in the hands of Buhari. I wish Obasanjo had said this earlier, i would have agitated that Buhari be made Minister of defence instead of President of a great nation like Nigeria.

Instead of jumping from one country to the other, Buhari should please take a lesson from other countries that are doing well, particularly the Malawian President who had decided to be flying British Airways and save the country a huge expense.

Ehi Ekhator can be reached at [email protected]