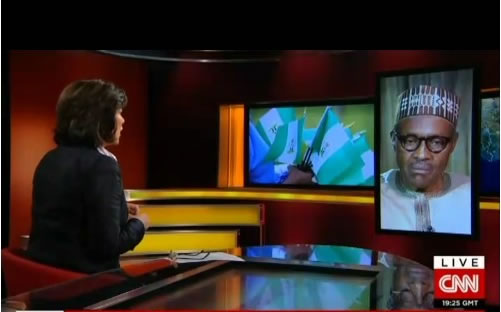 I missed my interview with President Sadat of Egypt by a whisker in 1978. About two days before the appointed time, his handlers got in touch to say the interview could no longer hold because a crew from the BBC had just turned up for the same purpose.

My plea that mine should be rescheduled was explained away by their fear of over exposure. I was eventually compensated with the late Dr Boutrous Ghali, their Foreign Minister who later became the U.N. Secretary General. I was disappointed and indignant. I didn’t understand—and I still don’t—why an African Head of State would prefer a foreign journalist (European) to a local journalist (African) especially since I did not think, at the risk of sounding immodest, that they were better at conducting interviews than I was. It however made me to appreciate the few leaders who gave me interviews.

So you can imagine how I feel when my own dear President shows a preference for foreign press and goes to Europe to give interviews that can easily be given here; or make statements that should be for local consumption.

I can maybe understand if he wants to address a global audience. But to hear on CNN that the much awaited budget has not been signed and will not be signed soon is a bit disrespectful of Nigerians. We all know how important the budget is in a country where government controls the purse strings. That it has inched into April is in itself a cause for concern because of the attendant hardship and uncertainties. The business community which includes even the pepper sellers greeted the news that it had been sent to the presidency for assent with relief. Only for the President to say he was in no hurry to sign. And he had to wait until he got to America to say it! If the reason adduced is tenable, the venue and the medium are certainly not. And in one short statement in a foreign land to a global audience, he cast aspersions on the National Assembly, the civil servants and almost anybody who had a hand in the preparation of the budget by raising the spectre of budget padding.

Somebody should please tell him that these bad portrayals of Nigerians as incompetent and fraudulent are bad public relations for a country that is actively looking for foreign investors. If we must wash our dirty linen, then let it be at home.

I hate to think Mr President is still contemptuous and distrustful of the Nigerian press after all these years. Because if he is not then it should not be too hard to find credible and experienced journalists he can do one-on-one interviews with from time to time, where he can bare his mind on sensitive and topical issues. If he thinks the foreign press is more patriotic and less partisan, then he needs to be educated. I also hate to think the President is one of those leaders who believe the colour of the skin confers wisdom, honesty and altruism because it does not.

It should be clear to all by now that Africa will have to solve its problems by itself. It’s a bit hypocritical to ask us to look inwards if you are going to be talking to us from outside because you do not trust your own local press. Generally, I find information management in this administration to be a bit sub-standard. In all my years in this business, I have never seen a corporate spokesman expose the underbelly of its organisation the way the APC’s deputy spokesman has done recently.

It was unprofessional and disrespectful. One can only hope it is not a reflection of the administration itself. Right now, the perception of the government as insensitive, and ill-prepared for the hard tasks ahead is gaining ground and nobody is doing much to change that perception. The government needs a clear and co-ordinated effort to work on and explain what it is doing on the things that are dear to us; things like security—and I am talking more about kidnappings, murders and the invasion of herdsmen than about Boko Haram—-money supply, fuel supply, employment and power to mention a few.

We need an economic road map and time-table. We need somebody to tell us consistently, what roles are expected of us in our search for economic recovery. For example, the government hinges our recovery on solid minerals, agriculture and power. Now, what opportunities exist for me in solid minerals if I want to be a bit—part player? Or medium player? Or if I choose to be a big player either alone or with foreign investors? Which solid minerals need a low entry level and which ones don’t? We can say the same thing about agriculture.

What sort of soil do I need to grow tomatoes or maize? What sort of climate? What do I do with what is termed as wastes, and are there really wastes? It is said of the palm tree for example, that every part is useful. The same thing with the coconut tree. How do I know of the many plants and fruits that are so endowed?

Where can I get information that will help me determine my entry level? What are the challenges of marketing and how do I overcome them? If we all must go back to the farm, then information is critical. And I am not talking of isolated, off the cuff comments and speeches. It is often said of mass communication that no matter how many times you say something, someone is going to hear of it for the first time.

So a concerted and organised information dissemination is required. I really do think that weekly radio and television programmes on the opportunities and challenges of agriculture and solid minerals in addition to jingles and easily available help lines will go a long way in keeping people informed. Please talk to us; not just that you are aware of our challenges— although that is important—but what you are doing to ameliorate our suffering. Please do not be vague. Electioneering season is over. And don’t tell us of the 16 years of PDP misrule. We already know that. That was why we voted for you and your promises of change. Besides, we are getting tired of this PDP alibi for inaction. We also know there are no easy choices after we have been led astray on several fronts by previous administrations. But we need somebody who has the compass to lead us out of the quagmire.

Please let us know if you are whom we seek or if we need to look for another.