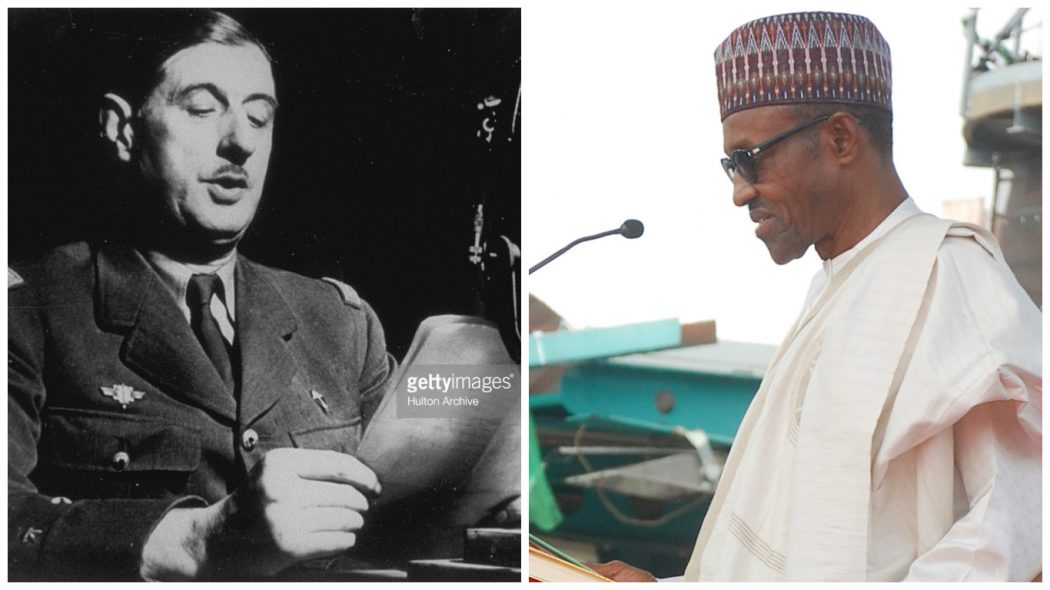 It has been discovered that President Muhammadu Buhari stole the famous “I belong to everybody and I belong to nobody” quote from the late Charles de Gaulle of France.

The quote, which was a key item in President Buhari’s May 29, 2015 inauguration speech, received a lot of commendation from Nigerians across political and religious divides. The quote immediately went viral and was listed by the BBC as the best quote out of Africa for the year 2015.

Further checks have however revealed that just like Buhari plagiarized Obama’s 2008 victory speech, the “I belong to everybody and I belong to nobody” is original to Charles de Gaulle who said “I am a man who belongs to no-one and who belongs to everyone”, while addressing a press conference on May 19, 1958. (Also see on GoodReads)

Charles de Gaulle was a French army officer  and statesman. He was the leader of Free France (1940-44) and the head of the Provisional Government of the French Republic (1944–46). In 1958, he founded the Fifth Republic and was elected as the 18th President of France, a position he held until his resignation in 1969. He was the dominant figure of France during the Cold War  and his memory continues to influence French politics.

Meanwhile, President Buhari admitted that he stole some lines from Obama’s 2008 victory speech which were inserted into a speech he delivered last week at the official launch of Nigeria’s “Change Begins With Me” campaign.

A statement by the Nigerian presidency blamed the intellectual property theft on an “overzealous staff” and vowed to mete out disciplinary actions against the staff, an unnamed deputy director in Nigeria’s Federal Civil Service.

The alleged staff has not yet been exposed and is still in office and protected. SaharaReporters announced that it was Mamman Daura who wrote these speeches for President Buhari.