In France, Nigeria’s president Buhari made a most delightful revelation while answering to questions on his plans to tackle terror in Nigeria’s northeast and restore peace and development to West Africa.

Nigeria’s new president, Muhammadu Buhari told the France 24 interviewer that his mission and top priority was to work with partners like France to urgently revive the dwindling lake Chad which has been blamed by experts as a major factor in unemployment and conflict around the lake, precipitating recurrent deadly cross border conflicts and accused in the etiology of Boko Haram terror.

We recognize that in Boko Haram’s northern pogrom agenda over the past five years, determinately displacing all farmers and fishermen in the northeast of Nigeria, with over 2 million so-far displaced, competition for resource especially water has been a major factor that has fueled the terror and ensured the instability of the region. Lake Chad that has reduced in size by over 90% over the years has been central to the existence of millions of livestock rearers, farmers and fishermen around the lake in the four countries. The bloody wars over Lake Chad started before the term Boko Haram was ever coined.

President Buhari explained that as a several year-old abandoned report and University presentation had proposed and several studies have advocated, re-filling the lake via canals will be of immense benefit to the entire region and will create over 4 million Jobs in Nigeria and millions more in neighboring nations.

The Lake Chad replenishment project has been proposed for over a decade as the lake reduced in size by over 93% from 20,000 square kilometers to 1,300 square kilometers today. The dwindling lake is source of water to 70 million West Africans, people in Cameroon, Chad, Nigeria and Niger. The vanishing lake has caused conflict and has been fingered among the reasons for covert sponsorship of Boko Haram by unscrupulous francophone elements.

Water: The World’s Most Precious Resource Few realize that water is the most valuable and invariably most precious resource in the world today. As astounding as this may read, a barrel of Eva water sells for double the price of a barrel of oil today. While competition over oil in the Chad basin has been pointed to in the Boko Haram crisis, regional competition for water may be a more implicated factor as many have written that the big wars of these times will be over water. The France-led western action against Libya with the expulsion and murder of Gaddafi has been suspected to be related to his aquifer “the Great manmade river” project which NATO reportedly bombed in 2011, which would have released so much water from Libya, the nation was poised for immense wealth as a major water supplier to all Europe. 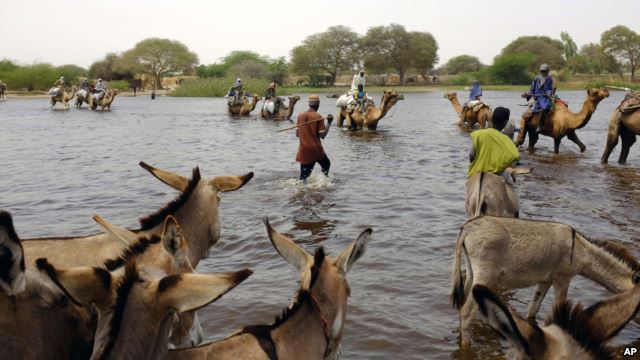 The necessary plans for restoring lake Chad include major water diversion schemes that would involve damming the Ubangi River, tributary of the river Congo, at Palambo in Central African Republic and channeling some of the water to the Lake through a navigable canal.

The project which requires strong African leadership to initiate and navigate the various diplomatic and regional challenges, is guaranteed to not only provide millions of jobs but also improve the living conditions of tens of millions with better access to water and power as a hydro-electric power dam is being conceived along with the recharging of the lake.

Prior Nigerian administrations have been accused of lacking the leadership to urgently proceed with this desperately needed project. Recharging the lake has been continuously abandoned by the often criticized as shallow past administrations over the past 30 years, accused of being enmeshed in corruption and of utilizing the cover of the diversions caused by terror and conflict to loot billions of dollars in State funds.