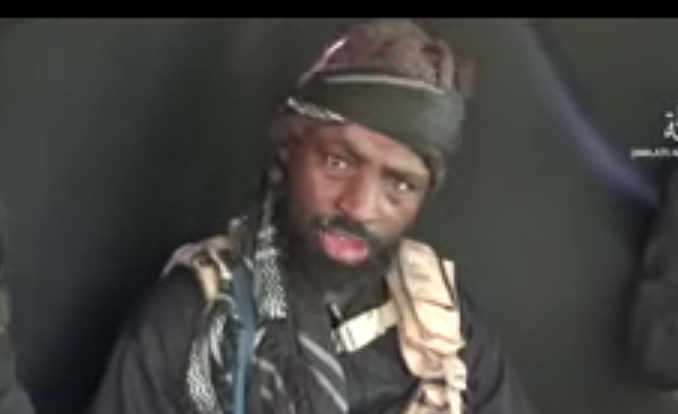 In what is clearly a defiance to the Nigerian government, the Boko Haram leader, Abubakar Shekau, vowed not to release the abducted Chibok girls unless his captured members were released by government agencies.

In the 39 minutes video posted on YouTube Saturday, Mr. Shekau also asked the Nigeria’s President Muhammadu Buhari to ‘repent’ and follow the ways of the Boko Haram.

Mr. Shekau, who spoke for 27 minutes in Arabic reading from a prepared script, called Mr. Buhari a cow worshiper and a liar.

He also said that until his captured members were released, parents of the Chibok girls should forget about their children.

In the speech, he criticized the use of National Anthem and the National pledge in schools claiming they were ways of making children unbelievers.

He also accused the “West” of introducing secular education, sports and music as a way to deny Muslims time to read their Quran.

“The non-Believers studied the Quran and realized that if the Muslims of the world recite and understand the Quran they will be united. So they introduce some programmes so that they will not have time for the Quran. The programmes include secular education, sports and music. And as a result of that today, many Muslims lost their Islam while others who claim to be Muslims have lost traces of Islam in the name of being educated,” the terror group’s leader said.

The 27-minute Arabic speech basically involved a lot of quotes of the Quran and Hadith, which he interpreted to justify his groups actions and motives.

Speaking in Hausa after the long speech in Arabic, Mr. Shekau warned President Buhari of the likeliness of betrayal from Nigerians. He called Mr. Buhari an unbeliever and a liar.

Read the full text of his speech in Hausa below

“My brothers in Islam, what I want to tell you in Hausa is, all of you unbelievers in Nigeria, Buhari and your likes and Idris Deby ( the President of Chad) with his goat-like eyes and the people of Niger, Africa, and the entire world, listen to me now. I am alive and healthy. But you should know that were my days of living over, you wouldn’t have seen me here.

“So many people live even when they are wanted dead, and so also people die when they should have lived.

“Prophet Muhammad (SAW) have been tested with similar hatred because of the religion of Allah.

“We are not sociologist, we are Quranists, and we follow the Hadith and those who came before us.

“We are fools as people but the Quran is what is guiding us and that is why you couldn’t defeat us and we are sure of that.

“So you think democracy is a religion. All of you the Hausa people in Nigeria, The Kanuri People in Nigeria and Miyetti Allah (A Fulani association of cattle rearers).

“Buhari you are worshiping cows, you better worship Allah. You think you are a general in the Army but you should know that Allah have said that you are not up the house of a spider in his eyes. What we believe in is the Quran and we do not know 2anything apart from that. Anytime we say Allah all of you will not live in peace.

It is Allah that we believe and trust that makes us live till this day and doing very well in our quest.

“Prophet Muhammad forbade us from using any plate used by a Jew without washing it first. He also forbade you from wearing the dress of the Jews.

“Buhari, all your actions are fake. You are lying to the people, collecting their money and saying you will free their children and you know you are lying.

“Buhari, Buhari, your people will soon betray you for all this lies.

“I am talking to you Buhari, sit back and think carefully. It is not this small Shekau that is disturbing you. No. It is Allah that is doing everything for us, continue and see.

“You deceived the people and you think you are doing the right thing.

“Continue and see, one day you will not even be able to go to the toilet and stool. But if you repent, then you are a brother. Repent and follow the Quran.

“People of Chibok, let me tell you today, you still have to prepare for a longer Bring Back Our girls campaign.

“If you want your girls, bring back our brothers.

“(Bragging) This is the same Shekau and I am good and healthy.

“The people of Kano you are in trouble. The Sokoto people have betrayed Usman Danfodio and they must repent.