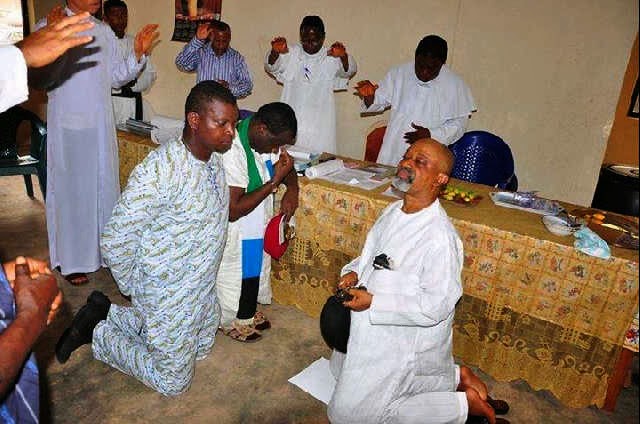 In 2003, Nigeria’s new nominee for ministerial post, Dr. Chris Ngige was taken to Okija shrine to swear an oath of allegiance to his political godfathers to keep his side of agreement to them on winning the Anambra governorship election.

Ngige’s visit to the shrine brought the death-shrine to global light. Several politicians are known to troop to the shrine to swear their oaths to each other.

From the dailies of the event:

“Ngige further revealed that he and a select group of the syndicate went to the fetish shrines at mid-night (2.00 a.m.) and performed some rituals involving dead bodies. Ngige further revealed that part of the rituals he performed included oath of obedience to Chief Chris Uba, the leader of cronies and some other documents on how to siphon away state funds.” Read more

How Ngige Also Signed And Recorded Several Videos Of His Resignation

“The group of eight not only regaled Senators and journalists with stories of how Ngige signed three letters of resignation within three months, they also played two separate video tapes purportedly showing the governor resigning his appointment.

“After perusing the undated letters of resignation presented to the Senate committee, Senator David Bonaventure Alechenu Mark (Benue) wanted to know why it took 24 hours after Ngige signed his last letter of resignation for the state House of Assembly, the police and others to put into effect the process of replacing him with the Deputy Governor. Then followed a pin-drop silence and no answer came from the group. The Senate Committee and journalists also watched two separate video tapes, one with Ngige and Chris Uba, of the Governor’s reported resignation.” Read more Wikileaks

On August 5, 2004, Nigerians and the world were horrified at the news that Nigerian police raided the Okija shrines on August 4, 2004 and made gruesome discovery of over 70 dead bodies, human skulls, hundred and possibly thousands of human parts openly displayed and at various levels of decomposition, some still fresh and headless and some were in their coffins; the same shrines Dr. Ngige and his gang had gone to perform oath-taking rituals in order to be illegally installed governor of Anambra State.

The police also recovered over five registers containing the names of the patrons of the shrine. Among the cronies that reportedly accompanied Dr. Ngige to the shrine were members of the federal, as well as, state legislatures and other very influential politicians.

Was Murder Committed at Okija Satanic Shrine? Was There Cover-up?

That set off speculation and unconfirmed reports filled the air that human being was sacrificed during the rituals. However the police investigation and actions of Gov. Ngige’s Anambra State Attorney-General and Ministry of Justice raises more questions of cover-up than answers.One Hon. Chuma Nzeribe, a member of Nigerian House of Representatives (a federal lawmaker) and few prominent individuals gave press interviews accusing the Anambra State Governor, Dr. Chris Ngige of patronizing the shrine and requested the police to quiz the governor regarding the dead bodies found there.

December 28, 2004: The Police Inspector-General Tafa Balogun stated in a press conference that forensic and pathological examination show that some of the dead bodies recovered from the Okija shrine had head injuries, which are signs that they were murdered.

March 2005: The Police concluded its investigation, granted bail to the ‘priests’ and transferred the case file to Governor Ngige’s Anambra State Ministry of Justice for prosecution.

July 2005: After almost five months of studying the case file, Ngige’s Anambra State Attorney General and Commissioner for Justice dropped a bombshell when he stated there would be problems prosecuting the ‘priests’ because the charges preferred by the police against the ‘priests’ could not support the facts uncovered by the police investigation.

August 24, 2005: Chief Magistrate freed the 38 surviving ones on the grounds that there was no evidence to sustain the charges against them.

It is unknown whether Anambra State funds went to the direction of the convicted corrupt police boss.

Questions of Cover-up on Okija Shrines

The above developments have raised many questions namely:

Multi-billionaire western investors eager to convince their groups to invest in the ‘new’ Anambra State said of this verdict, “this kind of stuff is one of the scariest worry about that country, how could they mishandle such a horrific case when everyone is watching? That is a hard one to spin. That is new Nigeria for you”. Source

Governor Ngige was finally ousted in 2006 after a court upheld the Tribunal ruling that he did not actually win the elections and that Peter Obi was the real victor. He had almost served three of his four years tenure.