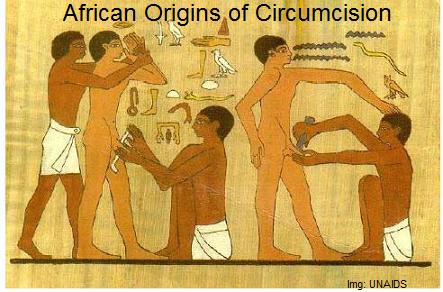 NewsRescue- Figures from Scientific studies a few years ago, astonishingly revealed that the traditional process of circumcision, ‘getting cut’, reduced the risk of HIV and other sexually transmitted diseases by 60%. This is much higher than the efficacy most medical best remedies for ailments need to record over placebo, to be put on our shelves.

Yet, despite these amazing results, and a WHO recommendation for male circumcision, many governments try to object to this ancient cultural process, which was early recorded in Egypt and is popular among adherents of Muslim and Jewish faiths, apparently in a bid to antagonize faith-based reasoning. This unfortunately is happening in Germany right now, as a court in Germany ruled that circumcising young boys for religious reasons amounts to bodily harm. A rather ridiculous ruling, considering the health benefits and implications of the process aside from its religious sense.

The study that revised the world understanding and appreciation of the value of circumcision, was conducted in South Africa in 2005. It was the first, largest study of its kind and the impact of being circumcised vs not being was so huge that on ethical grounds, the study was stopped before completion and circumcision was recommended to all participants.

The study, which followed infection rates in more than 3,000 heterosexual men over nearly two years, found that circumcision reduced a man’s risk of acquiring HIV by 60%.

Scientists had suspected circumcision might offer some protection against the virus after noticing differences in HIV infection between groups where circumcision was a cultural right of passage and others where few were circumcised. Until now, no large-scale studies had been carried out to investigate the effect.

Adrian Puren at the National Institute for Communicable Diseases in Johannesburg and a team of researchers in Paris recruited 3,274 uncircumcised volunteers from South Africa aged 18 to 24, who were considering circumcision. Half underwent the operation. The researchers then monitored both groups for HIV infection over the next 21 months.

So marked was the difference in infection between the groups that the study was halted on ethical grounds. Of those who had been circumcised, 20 tested positive for HIV while 49 of the uncircumcised group had contracted the virus.

Based on the results of this and several other studies, the World Health organization(WHO) took a stand and moved in on the systematic new world battles with the monotheistic faiths. You could hate circumcision because it appatently originated from Africa and is highly correlated with Islam and Judaism and indeed Christianity, but we have to recommend it for national and global health as important safety, prevention policy, the WHO came out to invariably declare:

But unfortunately the arrogance and ignorance of the legislative system of governments is hampering on the progress made by the WHO in recommending this practice which if adhered to can most significantly reduce the transmission rate of HIV and put under control, the global epidemic, which affects approximately 2.7 new people every year and according to Avert, is spreading most rapidly in Eastern Europe and Central Asia, where the number of people living with HIV increased by 250% between 2001 and 2010.

The German court decision in June this year, has sparked a lot of controversy, as the court ruled that a child’s right to physical integrity trumped religious and parental rights. Apparently the courts did not know about the child’s and societies over all health benefits of the procedure.

Here’s the BBC report on the unfortunate ruling from Germany:

BBC- The case involved a doctor who carried out a circumcision on a four year-old that led to medical complications.

Thousands of Muslim and Jewish boys are circumcised in Germany every year.

Circumcision, it decided, contravenes “interests of the child to decide later in life on his religious beliefs”.

The doctor involved in the case was acquitted and the ruling is not binding, but correspondents say it sets a precedent that would be taken into account by other German courts.

The president of Germany’s Central Council of Jews, Dieter Graumann, called it “an unprecedented and dramatic intervention in the right of religious communities to self-determination”.

He urged the country’s parliament to clarify the legal situation “to protect religious freedom against attacks”.

Male circumcision is part of the ancient religious rituals of both the Jewish and Muslim faiths, as well as the traditions of some tribal groups.

In some countries, such as the United States, it is also not uncommon for parents to request that young boys are circumcised for health reasons.

The BBC’s Stephen Evans in Germany says it is unclear what the next legal step will be, but this issue is a moral and political minefield.

Related: After allowing millions of deaths from AIDS, scientists finally agree with religionists on circumcision

Circumcision and the Prevention of HIV, STD’s

Dr Golden, who’s also an associate professor of medicine at the University of Washington Center for AIDS and STD in Seattle, said on USANews, “Circumcision should be routinely offered and available for those who want it. I think circumcision is in the best interest of the child.’ On 28 March 2007 the World Health Organization and UNAIDS issued a statement endorsing circumcision in prevention of the spread of HIV [World, 2007]. This stated “the efficacy of male circumcision in reducing female to male HIV transmission has now been proven beyond reasonable doubt. This is an important landmark in the history of HIV prevention”. It went on to recommend circumcision for men and boys. Infant circumcision was also advocated because it is “less complicated and risky”.

The United Nations General Assembly has also noted the importance of male circumcision in the fight against AIDS [United, 2008].

The Centers for Disease Control and Prevention concluded in a Report in 2008 that “male circumcision may also have a role in the prevention of HIV transmission in the United States” [Centers, 2008a]. In 2009 it was reported in the New York Times on Aug 24 that the CDC wanted to promote infant circumcision in the USA in order to protect against HIV and other conditions caused by lack of circumcision [Rabin, 2009].

The mucosal foreskin epithelium is the equivalent of inner nose or vaginal epithelium which has lower protection against microbes and the virus, when compared to the keratinized contact skin of a circumcised penis. It is known that women are are greater risk of HIV infection than men, due to the increased mucosa exposure.

According to Circumcision info: When the penis is aroused, the inner lining of the foreskin becomes stretched halfway down the shaft (see diagram below modified from McCoombe & Short [2006]). Its thin keratin lining becomes even thinner as a result, and when inserted into the vag1na or rectum of an infected partner the vulnerable inner foreskin becomes wholly and directly exposed to infected fluids in the partner. After intercourse, having acquired HIV, the preputial cavity serves as a hospitable environment for the infectious inoculum. This then facilitates transmission to subsequent sex partners. Read more details