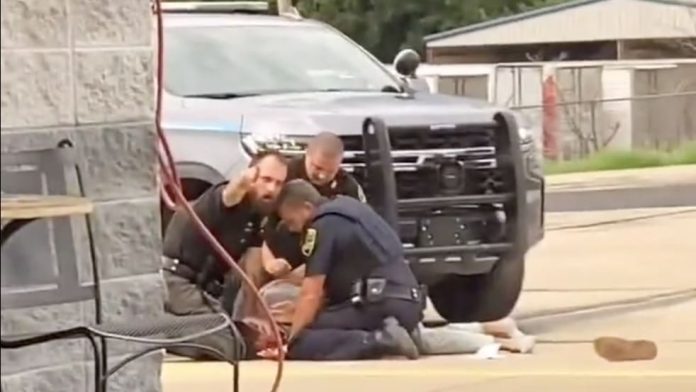 Arkansas State Police are investigating after shocking video emerged of three officers punching, kicking, and slamming a man’s head to the ground in Crawford County.

Naomi Johnson posted the video to social media after her sister witnessed the incident and recorded it on her phone.

According to the Arkansas Times, when Johnson’s sister pulled up to a gas station, she noticed a “shoeless” man who appeared to be in mental distress talking with police. The officers tackled the man after he appeared to be on the verge of fleeing. As witnesses yelled at officers, they could be heard telling them to “back the fuck up.”

Randall Worcester, 27, of Goose Creek, South Carolina, has since been identified as the suspect. According to authorities, he was taken to a nearby hospital for examination and treatment before being released and imprisoned at Van Buren.

“The Arkansas State Police have launched an investigation into the use of force by two Crawford County sheriff’s deputies and a Mulberry police officer during the arrest of a South Carolina man,” he said. The investigation was launched at the request of the prosecuting attorney for the 21st Judicial District.

The Crawford County Sheriff’s Office confirmed in a Facebook post Sunday evening that it “requested that Arkansas State Police conduct the investigation” and that the deputies had been suspended pending the outcome of the investigation. “I hold all of my employees accountable for their actions and will take appropriate action,” Sheriff Jimmy Damante said.

Arkansas Gov. Asa Hutchinson tweeted on Sunday night that the incident “will be investigated pursuant to the video evidence and the request of the prosecuting attorney” after discussions with Col. Bill Bryant of the Arkansas State Police.

According to Sadler, the state police investigation will be “limited to the use of physical force by the deputies and police officer.” “Once the investigation is completed, the case file will be submitted to the Crawford County prosecuting attorney, who will determine whether the use of force by the law enforcement officers was in accordance with Arkansas laws.”

Sadler referred questions about the officers’ identities to “their respective departments where they are employed.”