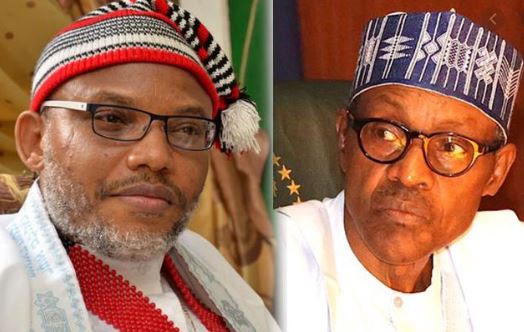 A State High Court in Umuahia, Nigeria’s South-east, has ruled that the Nigerian government violated the fundamental human rights of the detained IPOB leader, Nnamdi Kanu, when the military invaded his home in Abia State in September 2017.

The court handed down the ruling, Wednesday, in a fundamental human rights suit filed by Mr Kanu through his lawyer, Aloy Ejimakor.

The court said the invasion was a violation of Mr Kanu’s right to life, dignity of his human person, his personal liberty and his privacy.

The court, which rejected the government’s objection to the suit, said the government should pay N1billion as damages to the IPOB leader and publicly apologise to him.

The court, however, refused to nullify the ongoing trial of Mr Kanu for alleged terrorism, saying it lacked jurisdiction over the matter.

Mr Ejimakor, nevertheless, said the ruling would have an impact on Mr Kanu’s criminal trial.

“If your fundamental rights were violated, then it means that legally, you cannot be said to have jumped bail because the idea of jumping bail and the rendition are all related to what happened (the military invasion) in 2017.

“So if what led to his inability to face his trial in 2017 was a violation by the government of Nigeria, then legally speaking you cannot say that he jumped bail,” Mr Ejimakor said.

“People are celebrating, my client is celebrating. I am happy with the ruling,” he added.

The lawyer said the court “most importantly recommended a political solution to the Biafra agitation”.

Mazi Nnamdi Kanu wins as court awards N1billion against zoo federal government. But the big question here is does the Zoo government knows or understand the meaning of (rule of law) I don't believe that the Zoo Nigeria government will pay that N1 billion. To Mazi NNAMDI KANU pic.twitter.com/7FFwL5GXxH

Apart from the Federal Government of Nigeria, the respondents in the suit included the Attorney General of the Federation, the Chief of Army Staff, Brigade Commander, 14 Brigade Ohafia, and the Inspector General of Police.

Others were the Commissioner of Police, Abia State, the Director-General of the SSS, and the Abia State Director of the SSS.

IPOB, which is leading the agitation for an independent republic, Biafra, which they want to be carved out from Nigeria’s South-east and parts of South-south, has been accused of being responsible for the deadly attacks in the South-east and South-south.

Mr Kanu was previously arrested and released on bail. He had jumped bail in 2017.

He was “intercepted” in Kenya in June, last year, by Nigerian security agents and brought back to Abuja.