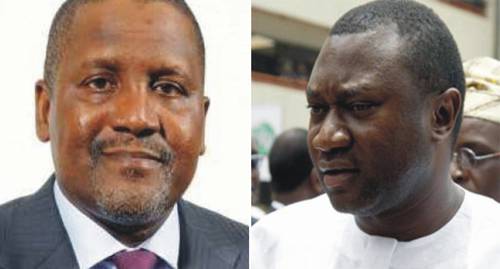 A high-ranking source at the Department of State Security (DSS) has alleged that so-called Africa’s richest person, Aliko Dangote, and Lagos-based businessman, Femi Otedola, recently used their perceived closeness to just-inaugurated President Muhammadu Buhari to instigate a widespread clampdown by security agents on businessmen in in the oil sector.

Our source disclosed that Mr. Dangote and Mr. Otedola, who swiftly switched loyalty to Mr. Buhari as soon as he won the March 28, 2015 presidential election, had used their influence to get the DSS to go after some of the two businessmen’s involved in shady oil marketing who are biggest competitors against them in the oil sector. Both Mr. Dangote and Mr. Otedola have reaped huge profits as fuel marketers.

Among the targets on the Dangote/Otedola list are oil marketers Benny Peters of Televaras, Igho Salome of Aiteo, and Tonye Cole of Sahara Energy.

A source at the Economic and Financial Crimes Commission (EFCC), Nigeria’s anti-corruption agency, told our correspondent that the two businessmen had “compiled a list of businessmen and approached us [the EFCC] to begin inviting them for interrogation over alleged financial crimes.” He added that the EFCC refused to act on the list, deciding to wait for directives from the new Buhari administration.

Miffed by the rebuff from the EFCC, Mr. Otedola reportedly contacted Ita Ekpeyong, the director general of the DSS, and handed him the list. Our DSS source said he and other officers were dismayed that Mr. Ekpeyong fell for the two businessmen’s ploy. Before last Saturday morning, DSS operatives had rounded up several businessmen on Mr. Otedola’s list, interrogated them, and asked them to surrender their international passports.

SaharaReporters learnt that the DSS had not only interrogated some of the businessmen on Mr. Otedola’s list but had also questioned more than twenty officials of the Nigerian National Petroleum Corporation (NNPC) as of Monday.

A source close to Mr. Buhari said the new president had been briefed on the connivance between Otedola, Dangote and the DSS. “That’s why President Buhari issued a press statement on Saturday washing his hands off the harassments,” said the source.

Dangote and Otedola are two of Nigeria’s most well-known and controversial moneymen. Both men have parleyed their closeness to former Presidents Olusegun Obasanjo, Umaru Yar’Adua, and Goodluck Jonathan to build multi-billion fortunes. Even though they have interests in a wide variety of sectors, including cement and fertilizer importation, they have reportedly raked in hundreds of millions of dollars through fuel marketing.

The two men were quick to visit then President-elect Buhari to offer congratulations on his election, even though they were believed to have offered significant financial backing to former President Jonathan. They were huge beneficiaries from import waivers and dubious loan buy back schemes that helped catapult them to the rank of billionaires.