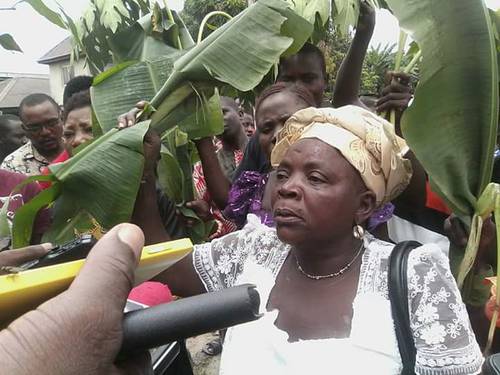 Citizens of Enerhen Community in Uvwie Local Government Area (LGA), Delta State staged a protest on Friday over the invasion of their community by soldiers and navy personnel said to be working under the instruction of two companies in the area.

SaharaReporters reliably learned that the military invasion was a result of the community questioning the relocation of Arco-Marine Limited and Python Engineering & Construction Co., who have vehemently refused to pay off indigenes in the community that have worked for the companies.

According to executive members, youths and women of Enerhen Community, the military invasion saw their community chairman escape from being killed by naval officers from NNS Delta and soldiers from the 3 Battalion Effurun, who were on guard for the two companies in the community.

Speaking on behalf of the community, local resident Mary Owolo stated that naval and army personnel on guard duty at Arco-Marine Limited and Python Engineering & Construction Co. allegedly shot at the chairman of the community, Comrade Lucky Emuakpor Izeku, for daring to challenge the companies’ relocation and refusal to pay off the indigenes that have worked for the companies.

Mrs. Owolo told journalists that the navy and army officers shattered the windows of a Kia Rio car belonging to the community chairman, resulting in serious tension in the area. She called on the Delta State government to intervene on the matter, adding that the community is a peaceful and law-abiding community.

Speaking on the issue, the chairman of Enerhen Community, Comrade Lucky Emuakpor Izeku, stated that he was severely harassed, intimidated and attacked by the army and navy when he approached the management of Arco-Marine Limited for the benefit of the indigenes under its employ as they were relocating to Port Harcourt.

“Youths from the community had earlier approached Arco-Marine Limited in a peaceful manner for their pay-off and other packages when the naval and army personnel on guard duty, working on the instructions of the company, threatened to deal decisively with the youths,” Mr. Izeku said.

“The naval personnel on guard duty, in a bid to carry out instructions of the company, ran to the opposite company, Python Engineering & Construction Co., to solicit the support of its soldier colleagues. They invaded the community, shooting sporadically into the air as they threatened to kill anyone who dared to challenge them,” he added.

Mr. Izeku threatened to seek a redress in the court of law over the invasion of his community by the Nigerian navy, the Nigerian army and the management of Arco-Marine and Python Engineering & Construction Co. if they fail to replace his damaged Kia Rio car with a new one.

When contacted on the issue, the commander of the 3 Battalion Effurun, Major Azaku, exonerated his men, saying that the naval personnel should be held responsible for whatever transpired.  On his part, Commodore Raimi Mohammed, the commander of the Nigerian navy ship, NNS Delta, said the Nigerian navy is investigating the matter and assured the community that he was handling it in a transparent manner.

According to Commodore Mohammed, he is investigating the matter, including allegations that weapons were fired at protestors. He has already called for the navy personnel in question to come forward to explain themselves, stressing that the navy would not condone any form of indiscipline from its personnel.

It would be recalled that last month police and army officers, allegedly working under the instructions of Governor Ifeanyi Okowa and his principal secretary, invaded Ekpan Community in Delta State, where properties worth millions of naira were destroyed.