The ongoing investigation by SaharaReporters into properties acquired in Dubai by Chief of Army Staff (COAS), General Tukur Buratai, has revealed more details about the officer’s real estate acquisitions estimated at N160 million at the minimum. Our investigators found out that, when not occupied by General Buratai or members of his family, the units he acquired in Dubai are rented out to guests for as much as $500 a night.

Earlier investigative reports by SaharaReporters found that, as the Director of Procurement at the Defense Headquarters, General Buratai diverted funds meant for the purchase of vehicles and motorcycles for Nigerian troops involved in the fight against Boko Haram terrorists. Our reliable sources in the military revealed that the COAS  colluded with a front, a businessman, to procure used vehicles that were in such bad shape that they needed to be significantly refurbished before they could be used. 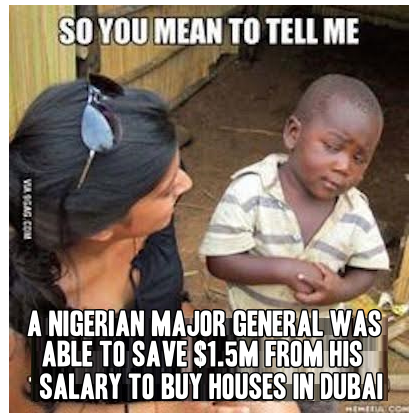 Documents obtained by our investigators showed that, on January 13th, 2013, General Buratai reached an agreement to purchase unit “2711” at the TGF Marina Hotel. Our investigative team found that the purchase, which the COAS claimed was an investment through the “Project TFG Marina Hotel,” was completely paid for in one transaction. Eventually, the TGF Marina changed its name to “The Wyndham Dubai Marina.”

Our latest investigations reveal that General Buratai paid The First Group Real Estate for his first real estate acquisition through a Skye Bank account in Nigeria.

General Buratai purchased the second apartment days after becoming the Chief of Army Staff through a Skye Bank account as well. However, this time, he used an army officer, Major Emmanuel G. Adegbola of the Nigerian Army Finance Corps (N/10808), to make several deposits for the second Dubai real estate purchase.

Military sources told SaharaReporters that the COAS stole the funds from Nigerian Army Accounts. One source said it was a well-known practice for senior army officers to use their subordinate officers to pilfer defense funds, adding that the practice took root during the administration of ex-President Goodluck Jonathan. Numerous military chiefs who served under Mr. Jonathan have been indicted for corruption and are facing trial.

The First Group, which sold the Dubai properties to General Buratai, is a UK real estate development company, but with many international offices, including ones in Abuja, Lagos, and Ghana. On its website, TFG offers potential clients the opportunity to be part of the company’s “exclusive investment property owners’ club” where TFG will “provide you with much more than amazing real estate and lucrative returns.” The site adds that “ownership with us gives you instant membership to our prestigious club and access to a world of exciting rewards and privileges, from fast cash returns and investment property credit to fully paid Dubai holidays.”

In addition to these enticing offers, TFG also offers clients a copy of their Hotel Investment Guide for Dubai. According to the investment guide “one of the major advantages Dubai offers investors is a tax-free environment” with “zero local corporate or personal tax.” The investment guide also directly focuses on the financial returns from owning units in the Wyndham Dubai Marina, stating that the properties were “ideally positioned to generate the strongest possible returns for investors.”

According to a digital news source, Emerites 24/7, in 2015 the “gross and rental returns in Dubai Marina were 8.1 percent and 7.16 percent.” Subsequent investigations by SaharaReporters have found that General Buratai’s unit, when not occupied by him or his family, is rented out to hotel patrons for around $500 per night.

According to a hotel employee with knowledge of ownership and unit rentals, a room on the 27th floor of the Wyndham Dubai Marina could range from $463 to around $500 per night. The hotel employee told SaharaReporters that the cost would depend on public demand and availability of rooms in the hotel.

SaharaReporters also found that the hotel has varying degrees of luxury for units ranging from junior suites, grand rooms, superior rooms, and club rooms. One hotel employee explained to SaharaReporters that, often, the higher the floor the more expensive the unit with “the most luxury being in the club rooms.” This same employee said that many of the units on the 27th floor are considered “superior rooms” which are just below club room in terms of luxury.