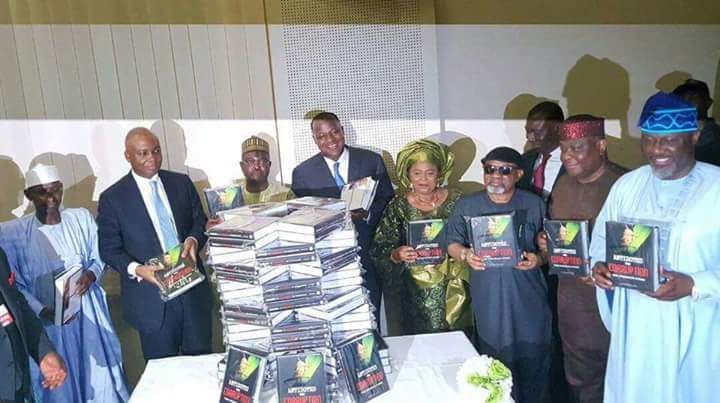 Controversial Senator Dino Melaye, who represents the Kogi West Federal Constituency in the Upper House, today in Abuja launched a 600-page book entitled, ‘Antidotes for Corruption: The Nigerian Story,’ at which the anti-graft agencies were curiously absent.

Many of the high-profile politicians at the event, some of them with known ethical questions, expressed a mixture of surprise and relief to see that there was no single representative of the Economic and Financial Crimes Commission (EFCC) or the Independent Corrupt Practices and other Related Offences Commission (ICPC).

Prominent at the occasion were the Former First Lady, Patience Jonathan, Senate President Bukola Saraki, Speaker of the House of Representatives Yakubu Dogara, and Minister of Labour Chris Ngige.

It is the equivalent of Al Capone writing an anti Mafia book and the Gambino family attending the book launch! @EveryNigerian @ogundamisi https://t.co/8C3UEqsb1B

Also present were Ghali Na’aba, a former Speaker of the House; Anyim Pius Anyim, a former Secretary to the Government of the Federation; Idris Wada, a former Kogi State Governor; Attahiru Bafarawa, a former Sokoto State governor; and several senators.

In a speech, Saraki, who is on trial for corruption at the Code of Conduct Tribunal for false declaration of assets, described the “sensationalization” of corruption fight as ‘unnecessary and counter-productive.’

In a dig at the government and the EFCC, he said that corruption must be fought to its roots and foundation,rather than blowing it out of proportion on the pages of newspapers.

The Senate President argued that the justice system provides for forensic investigation, which, according to him, is lacking in Nigeria. He commended the resilience of Senator Melaye for writing such a voluminous book despite his busy schedule.

At the middle of the event, there was a sudden appearance of Mrs. Jonathan to a chorus of “Mama Peace!’ which disrupted the event for few minutes.  Mrs. Jonathan is currently embroiled in a court battle for nearly $6 million she claims to have obtained from gifts given to her by undisclosed people.

Mr. Melaye, for his part, was temporarily an ‘anti-corruption’ fighter a few years ago as chairman of the ‘Anti-Corruption Network’ in Abuja.  He then became astoundingly rich, almost overnight, owning a multi-billion Naira home in Abuja, and routinely flaunting a fleet of exotic cars.   He has refused to answer any questions about the source of his wealth.

Only recently, there was a national uproar about whether Mr. Melaye actually earned an undergraduate degree at the Ahmadu Bello University, Zaria.  At least two foreign universities he had claimed he earned higher degrees in have since announced he was never a student there.

Senator Melaye has also emerged as one of the critics of Ibrahim Magu as Chairman of the EFCC, helping to inflict a major setback upon his confirmation in the Senate.