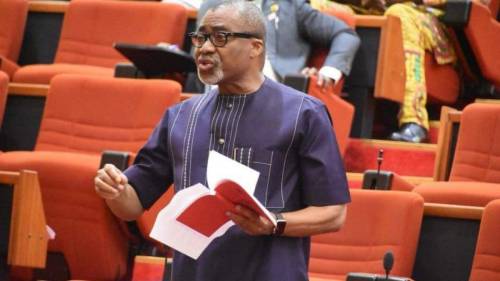 Minority Leader of the Senate, Enyinnaya Abaribe, has said that he would embark on foreign trips regardless of a threat by the Indigenous People of Biafra to publicly humiliate Nigerian leaders, who they claim have impoverished the country.

Abaribe’s comment comes after former Deputy Senate President, Ike Ekweremadu, was assaulted in Germany at an event organised by Nigerians.

Speaking with PUNCH, Abaribe said, “One of the hallmarks of constitutional democracy is the fundamental rights of people.

“Except we want to have an autocracy, so long it’s a democracy, then you have got to be a democrat. What a democrat does is that they respect the rights of others.

“For instance, I am travelling next week; I will be in Houston and also in Atlanta in the United States.

“I will go anywhere I want to go in the world, I don’t care. Senator Ekweremadu, despite the assault he suffered, has also said that people should be free to go to wherever they want. Because of that, I do not really see why anybody should be afraid to exercise their rights.

“It is only in Nigeria that people do things without getting appropriate sanctions.

“If you restrict the rights of another person in developed countries, I do not think that the enforcement agencies there will just let you walk around and do that.”