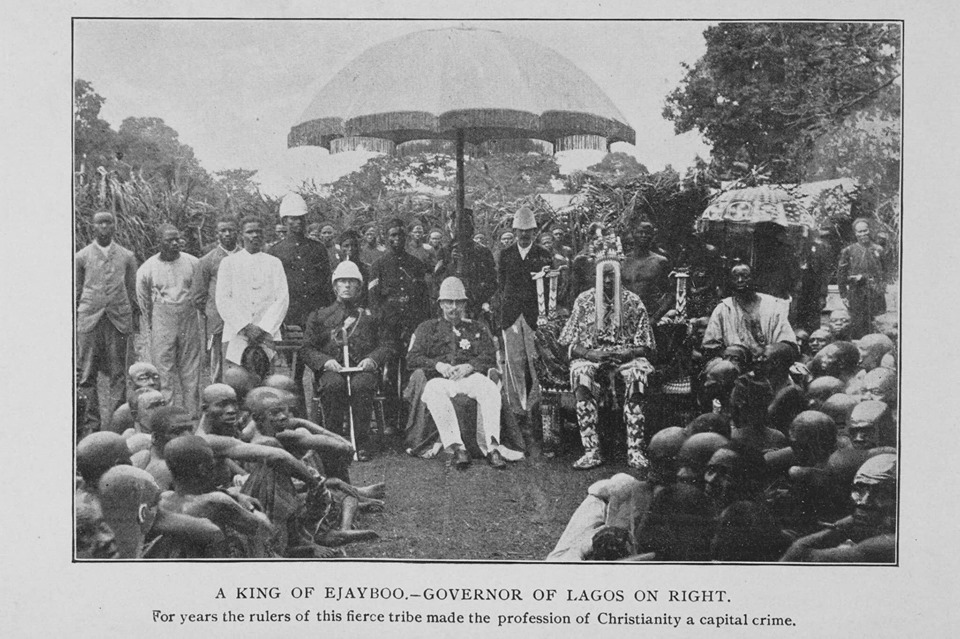 When the British arrived at the coasts of Lagos…. they realized the major obstacles in their way of making inroads into Nigeria through Yorubaland. One was Ibadan warriors who were super conservatives determined to ensure Yoruba autonomy from all forms of foreign rule. The other was Ijebu Kingdom which was a race of proud people who rejected all attempts of the British to claim superiority. The Ijebu people in particular did not give the British any special privileges and refused all attempts of missionary work in Ijebu.

Taking interest in the war between Ibadan and the Ijesha/Ekiti, the British secretly joined with Ijesha, hoping to use them to reduce the dominant influence Ibadan played in the interiors of Yoruba land. They helped the Ijesha merchants in Lagos form a union that contributed funds and introduced to them a new kind of gun known as the Snyder rifles. These guns were more superior to the dane guns used by Ibadan and caused major havocs in the battle field. A section of Ijesha army was trained to use the guns. There known as the ‘ Ijesha rifle corps.’ They engaged Ibadan soldiers using British styled commands in battle and dressed like Britishmen, using the western styled military uniforms….. Among them were missionaries encouraged by the British to take up arms for Ijesha.

The new elite gunmen broke the spirits of Ibadan warriors… many of their generals including Chief Akintola were casualties of the war and a great Ibadan general by the name Belo ( son of the great warlord Osundina … a top general at the time of Bashorun Ogunmola) was killed in the war…. Ogedemgbe was not all excited about the help from the British…. Having trained to be a solider at Ibadan…. he wished no disgrace for Ibadan beyond resistance against Ijesha… The British however wanted to use the situation to totally subdue Ibadan. The situation worked to the benefit of the British….. Alaafin Adeyemi of Oyo eventually would send letters to the British in Lagos seeking their help in arbitration to end the war. Using the opportunity to infiltrate the regions, they set up missionary work at Ibadan and Oyo.

After the negotiations for peace, Captain Bower took a trip to Ilesha, arrested Ogedemgbe and kept him in detention for two years at Iwo….. He confiscated all the weapons in his possession used by the Ijesha rifle corps in the campaign against Ibadan and ensured that the soldiers under Ogedemgbe were dispersed before his release.

Lagos was totally eclipsed by Ijebu in the 1800’s. this meant that all routes from Lagos into the interiors must pass through Ijebu. Many of the lands that are today part of Lagos… including Ikorodu and Epe used to be ancestral lands of Ijebu people. ( Lagos in the 1800’s was confined to the islands and was more of creeks and swamps). This posed serious disadvantage to the British as Ijebu was hostile towards them. They monopolized the trade route between Lagos and the interiors and allowed the exchange through Ijebu middle men at the frontier town of Oru. (Their major trading partners were from Ibadan).
Governor Thomas Carter tried to get the monarchy at Ijebu to sign a treaty with him to allow free trade route from Lagos to the interiors through Ijebu with a generous offer of annual toll fee of 500 pounds to Ijebu. The treaty was one made more or less out of pressure by the high ranking chiefs of Ijebu. The Awujale however refused to honor it……

Awujale of Ijebuland made more strict laws against the British after…. His land was not to be used to transport any materials for missionary work in the interiors…. When this law was defied by Ibadan, Awujale threatened once again to cut trade ties with Ibadan and close down the market at Oru. Fearing once again that they may lose access to ammunitions as was the case at the time of Awujale Fidipote…. They opened negotiations with the Awujale. He demanded that all missionary works should stop at Ibadan… that a local convert by the name Reverend Olubi who was the CMS representative at Ibadan should be expelled and a white missionary at Ibadan ( Reverend Harding) be executed and his head sent to his palace at Ijebu. Finally, he demanded that all local Christian converts at Ibadan must be expelled and their properties confiscated.

Ibadan chiefs, in an attempt to be in good standing with Ijebu held discussions and considered honoring the demands of the Awujale….. This was the final straw for the colonial government at Lagos. They decided to lauch a campaign against Ijebu and sack the city.

The campaign against Ijebu was a large one…. The Governor at Lagos requested for Officers from England…. Gold Coast, Serria Leone and India…. His soldiers at Lagos were mainly Hausas. They were the ones he could trust…… Ibadan sent a few of its veteran soldiers to aid the British in Lagos against Ijebu ( probably a way to get back for the many decades Ijebu frustrated many of the Ibadan campaigns by restricting access to rifles and gunpowder)

Awujale Adesinbo planted a few garrisons at Ito Ike in early May of 1892, thinking the coalition from Lagos would come through the creeeks on naval ships…. Spies had however told them of the charms that Ijebu put along the sea routes. The vessels decided to invade through Epe.

Ijebu warriors held fast and destroyed a few of the garrisons…. Up until Pobo where they destyoed many of the Lagos and Ibadan garrisons…. It was here that British captain Willoughby lost his life…..

The deal changer was the Indian regiment and their use of rockets that spit fire.. Ibadan people called it ‘dana sungbo’ ( machines that set the forest on fire)…..20th of May 1892, the British reached Ijebu ode and sacked it. They laid a siege on the capital and held the Awujale prisoner in his palace….