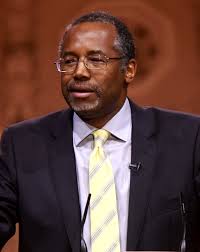 The leading Muslim civil liberties group in America called Monday for Republican Ben Carson to drop out of the presidential race after the retired neurosurgeon said this weekend that he doesn’t believe any Muslim should be president of the United States.

Nihad Awad, executive director of the Council on American-Islamic Relations, said the group is calling on Carson to “withdraw from the presidential race because he is unfit to lead, because his views are inconsistent with the United States Constitution.”

Carson is currently a top contender for the GOP presidential nomination, taking third place with 14% of support in the latest CNN/ORC poll, released Sunday.

His comments came as he responded to another controversy involving a GOP presidential candidate and Muslims in America when a questioner told Donald Trump at a campaign event in New Hampshire that “we have a problem in this country … called Muslims” and said that President Barack Obama is a Muslim.

Awad insisted that it was Carson’s, not Muslim Americans’, views that are inconsistent with the Constitution, as the document states that there shall be “no religious test” for candidates seeking public office.

Awad said he was “shocked” to hear Carson’s comments, which he described as “anti-Muslim.” He urged the public and other presidential candidates to “repudiate” Carson’s views.

“The protection of freedom of religion in America is a fundamental principle of our country so whether you are Christian, you are Jewish, you are Muslim, you are Catholic, you are black, you are brown, you are white — if you are born in this country, if you uphold Constitution, if you have the vision, if you are fit to lead, you can lead irrespective of your faith tradition,” Awad said.

The Anti-Defamation League, a group that fights anti-Semitism and other bigotry, called Carson’s comments “deeply offensive, un-American and contrary to the Constitution” in a statement from ADL National Director Jonathan Greenblatt.

“As the campaign season advances, we urge all presidential candidates to avoid innuendo and stereotyping of all sorts, including against people based on their faith, particularly American Muslims and, instead, to confront all forms of prejudice and bigotry. Remarks suggesting that all Muslims follow extremist interpretations of Islam have no basis in fact and fuel bigotry,” Greenblatt said.

Greenblatt also knocked Trump for his “failure to stand up to an anti-Muslim bigot at a campiagn rally who questioned whether President Obama was a Muslim.”

Immediately following Awad’s comments, Carson’s business manager, Armstrong Williams, told CNN that Carson was not trying to “hurt or offend” but came to his conclusion about Islam “because of his love for America.”

“What an individual believes impacts how America is governed and what we become as a nation,” Williams said, adding that Carson is not alone in his view of Islam.

In fact, according to a Gallup survey published in June, 38% of Americans polled said they would not support a Muslim candidate for president, while 60% said they would.

Williams also slammed what he called the “destructive tenets of Islam and Sharia law.”

Democratic front-runner Hillary Clinton tweeted a brief question and answer Monday: “Can a Muslim be President of the United States of America? In a word: Yes. Now let’s move on,” signing the tweet “H” to show it was from her. Read full on CNN