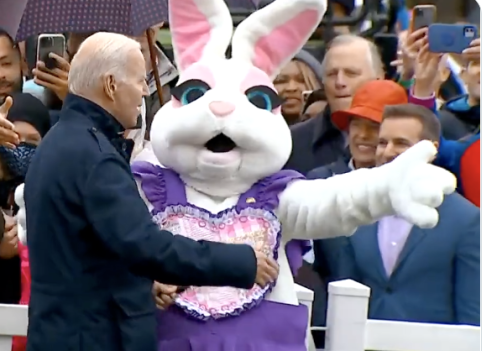 As president Biden started bumbling about Pakistan and Afghanistan, an alien super spy doubled as an easter bunny appeared to zap to the rescue to quickly cut Biden short and direct him away from the camera holding crowd.

Joe Biden quickly interrupted by the Easter Bunny after he starts to comment on #Afghanistan and #Pakistan at the White House #EasterEggRoll 🐰 pic.twitter.com/xLkuyyudDj

Why is the Easter Bunny directing the President of the United States 🥲🥲🥲🥲🥲🥲🥲🥲 pic.twitter.com/9bgXQJ6EXW

In the short clip, Biden appeared to be saying something like “Pakistan should not and Afghanistan be… people should be free,” before he was rudely interrupted.